By Paisley Kirkpatrick It's me. J. Morgan. Yep, I'm here again. Paisley kindly asked me to come back for another dose of me. Between, me, you and that suspicious looking Christmas tree over there, I think she just wanted to get out of blogging this month. She said something about fruitcakes and oven humidity making her dizzy. I'm not buying it though. But, since one of those fruitcakes rested on a very large plate for all of five minutes before someone ate it, namely me, I'm back for another visit talking about my just released Immortally Damned. With Christmas only a day or so away, I should be talking about my Christmas short, Claus…I love you. It would be easy to chit chat with you about a story that screams Christmas -- love. Like I said, real easy. But, I'm not. Why? Because, I have decided to shock you with a revelation so mind blowing Paisley will wish that oven humidity had made her pass out! Caern from Immortally Damned is loosely based on me! Yes, that's right. I am really a failed priest. Bet you thought I was going to say vampire. Failed priest you say? Yes, at one time in my life I wanted to be a priest. Being raised Catholic, I'm sure a lot of boys in a Catholic run school have the same idea. I would have followed through with that holy vocation if not for one thing. No, not chastity. Wait, make that two things. The second one being puberty. The female of the species puberty, not mine, though it figures heavily in my change in life pursuits. As I enter my forties full on, I've often wondered what would have become of me, if I had gone through with holy orders. Again, puberty keeps derailing those thoughts. Like Caern, I didn't and I have lived with the consequences ever since. I'm sure God didn't like it much, or breathed a sigh of relief. In fact it wasn't until I finished Immortally Damned that it dawned on me just how much of myself I'd pumped into my half vampire. I know that authors do it all the time, but this time I was really channeling the old noggin into the project. That's not saying that all of Caern is me. That'd be insane. Well, more insane than I normally am. Still, when it comes to crafting characters you have to empathize with them. You absolutely need to crawl into their skins and come to know them, inside and out. Otherwise, you're just tossing meaningless works onto a screen. Saying that writing is cathartic is stating it mildly. Given half a chance, I'm pretty sure authors subconsciously reveal more of themselves than they'd do to an accredited therapist. It's up to you the readers to wade through the fiction to find a glimmer of fact. I firmly believe that if a writer has the power to fully draw you into a story, he or she has just invited you into their lives. Like I said, I doubt we realize we're doing it, but hey, it's cheaper than that visit to the psychiatrist. You know, I probably shouldn't even finish the blog. You're calling the men in white coats right now aren't you? They're coming to take me away. Ha ha! Oops, I didn't mean to write that. So, before they get here, let me wish you a Merry Christmas and the Happiest of New Years. To distract you while I make a hasty retreat out the window over the kitchen sink, please enjoy the below excerpt. Have those men in white coats read as well. I run really really slow. Amor Immorati Book Two Immortally Damned 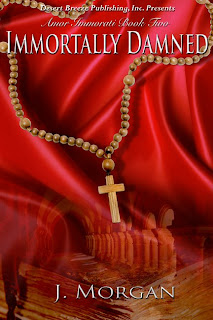 Blurb: Caern swore to never return to New Orleans, his death warrant making the choice easy. Well, easy until his past returns to smack him around. Now, he has to return to the one place where death isn't a possibility, it's a guarantee. And only a matter of time. Searching to find a murderer out to kill the grandchild he never thought to meet, he finds himself falling into a hell he just might not be able to crawl free of. His only hope lies in Detective Eliza Marrone. Falling for her isn't in the cards, but his heart tells him it might be the only thing he can't escape. Zombies, old lovers and psychopathic vampire clergy, yeah those are things he can deal with. True love on the other hand is the one thing he's always avoided. This time there's no way out. It might get him killed, or end up saving his wretched soul. Excerpt: "Yeah." Caern winced at the shattering of glass. "Let's go before they break through. I don't like the idea of facing them in this enclosed space." "Me either," Eliza agreed. "If I'd known this day would end with a zombie apocalypse I'd have packed an extra clip or five." "You aren't the only one." Caern thought his nine hour sadly inadequate for the job at hand. He hoped Raiz had thought to grab his bag. In all the rush, he'd forgotten all about it. "Eliza, take point. Steph and I will play cleanup. If it moans, shoot it. Don't think twice." She set a round into the chamber. "Head shots, I presume." "Sure, it might work. These aren't your movie zombies. Dupres controls them. Head shot might sever the connection, but if it keeps moving, go for the knees. A disabled zombie is just as good as dead one." He set his own round. "Bites won't turn you into one, but it'll give you crap amoxicillin won't touch. Think Ebola and leprosy all wrapped into one." "Nice." Eliza bent in and kissed him on the tip of the nose. "Caern, you take me to the nicest places. By the way, that was for luck. You get me out of this alive, and I'll show you how lucky." "Were you just flirting with me, Detective Marrone?" He wondered what type of lucky that might entail. "If you have to ask, you're not old enough to find out." She pinched his cheek. "We better play nice before we make somebody upchuck." "Meet you on the other side." He threaded his fingers through hers. "Don't be a hero. Things go FUBAR, you grab Deborah and fort up somewhere until it's safe." "Same goes for you. Just because you're half vamp doesn't mean you're indestructible." She bent close and whispered. "Or irreplaceable. Don't make me regret not killing you when I had the chance." Caern brushed his lips across her cheek. "I think that's the most romantic thing I've ever heard." "Yeah, I'm a sweet talker." She pushed him back. "I'm through being mushy. Let's go kill something." "As you wish, milady." Watching her walk away had to have been the hardest thing he'd ever done. Just knowing what they were about to jump into, it took every thing he had to stop himself from going caveman and shove her in the nearest broom closet and lock the door. The fire in her eye told him what would happen. She could handle herself. Like the rest of them, she was a warrior born. That didn't keep his heart from skipping a beat, as she led them down the narrow hallway to the rear of the hotel. Each open doorway they came to sent another pang of fear racing through him. The shouts echoing behind them only made it worse. If he could have got his hands on Dupres, Caern would have gladly throttled the life out of the undead bastard. He settled for killing some of his pets. If anything happened to Eliza or Deborah, all bets were off. Caern would pile corpses around him and burn this whole city down around his rotting ass. Available Now From Desert Breeze Publishing http://stores.desertbreezepublishing.com/-strse-387/Amor-Immorati-Book-Two-cln-/Detail.bok Also Available through Amazon http://www.amazon.com/Amor-Immorati-Book-Two-ebook/dp/B00AMI6O82/ref=sr_1_1?ie=UTF8&qid=1355687558&sr=8-1&keywords=immortally+damned Barnes and Noble http://www.barnesandnoble.com/w/amor-immorati-book-two-j-morgan/1113940031?ean=2940015747089 and other fine online book sellers. Where in the net is J. Morgan? My Yahoo Newsletter http://groups.yahoo.com/group/jmorganslair/ My much forgotten Website http://www.freewebs.com/jmorganslair/
Posted by Paisley Kirkpatrick at 1:46 AM

Thank you, Josie. I am glad you were able to read it. I am extremely proud of J.'s writing and it is my pleasure to help promote him.

Merry Christmas back to you. Have a great holiday. Hugs!

Sounds great. I didn't know this was out! Toot your horn a tad more.

Thanks guys. Glad you enjoyed the excerpt. Hope you all had a fabulous Christmas and have an even better New Year.