"I see fear in a handful of dust."
So said T.S. Eliot, renowned poet, who, as it happens is a 'high-reactive,' a human beset with anxiety. How he became a profit-making, revered writer is another story.  His sentiments about fear lead into my novel, FEAR LAND, a suspense story about many strains of anxiety.

I'm giving you a sneak peak at my cover and blurb and can't wait to tell you when the novel will see the light of day.  As you can imagine, a novel about anxiety...those who have it and those who treat it...is challenging enough.  Add suspense and a truckload of villains and we've got major fun...and stress.

Here's the cover and here's the blurb about FEAR LAND.  I'll let you know when you can buy the book on Kindle and CreatesSpace. 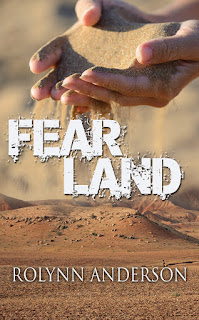 Tally hates to hear rants from people’s brains.  What does she do when those mind-screams threaten the man she loves?
****
Tally Rosella, an acclaimed psychiatrist who helps children fraught with anxiety, avoids adults because their brains rant at her.  But the chance to start a second child study and connect her findings to PTSD, sets her squarely among devious colleagues at a big California university.

Army Major Cole Messer, Tally’s new neighbor, won’t admit that trauma from combat tours in Afghanistan, destroyed his marriage and hampered his ability to lead.  As a teacher of college ROTC and single parent, he’s focused on enrolling his highly anxious son in Tally’s study and getting back to active duty.

Someone is dead set against Tally’s presence at the university, and blowback from her battles with co-workers put Cole and his son in jeopardy.  Watch what happens when people struggling with shades of anxiety collide with corrupt, revengeful foes.

Hmmm I seem to have another must read here. Keep me posted, please, about when it's available.

Awesome. I'm reading a book on PTSD from those who have served in Iraq and Afghanistan as part of my research for my next series. It's slow reading for me. I sometimes have to revert to the dictionary. But I'm learning which is always a good thing. My writing schedule has slowed down enough I can research without the anxiety of clock watching. I'll be eager to read this book. Hugs!!!

Love the cover and the blurb promises an excellent story. I hope to see a release date soon.

Ooooh, sounds wonderful, Rolynn, and that cover is great. Congratulations! I'll definitely order this one!

Margo, Vonnie, Sandra and Robena
Many thanks for your enthusiastic response to my cover. I think you're going to like this book because I explore shades of anxiety. As Vonnie said, there is so much to learn in this area...even that PTSD is not called PTS (drop the 'disorder'). I had no idea that children were born 'high-anxious' and that brain scans can detect trauma. That's what I like about writing...so much to learn!

Love your premise and the cover. Good luck!