I can almost hear the voices -

shouting to be heard at RWA National Conference.

I didn't go this year. Haven't gone for a few years, and may not go for a few more. Very pricey and often inconvenient for me to get to.

But I will go to another one, someday, and I want to see if it's as LOUD as I remember. Thousands of women all in one place, talk-talk-talking. That's what I remember about the RWA conferences of the past.

I also remember the incredible energy of all those writers in one place. Many were pitching books, many were trying to pimp their books (you know what I mean) and many were just there to visit friends. It's like one big energy bundle all bottled up in one spot.

Yep. This is conference week and I feel a bit envious of those who are there. At least, I'm envious until I revel in the quietness of my home here in the woods.

I can almost hear the voices....

In search of productivity

Recently I've had a problem that I'm sure most writers have from time to time. That problem is productivity, meaning writing productivity which translates to words on the virtual page. I sit down to write, fully intending to write, but for some reason I can't help looking at email, checking my Facebook page, or doing pretty much anything but actually writing.

I've decided this has gone on long enough. Starting today, I'm going to actually work on my WIP rather than say I'm going to work on it and then end up playing solitaire instead.

I'm a sucker for software products that are supposed to help with this kind of thing, so I've just installed a program on my computer called "Vitamin-R" which was part of a MacHeist software bundle I purchased today. It came with several other programs that I might look into later, but it was the Vitamin R that sold me on the bundle.

The program is running now as I write this blog post, having hidden all my other programs so I'm not distracted. Every minute or so it ticks and at intervals announces how long I've got left on the time slice I allotted to write this. Kind of cool, actually.

I have only five minutes left... I know because it just told me.

So maybe this is just a toy that I'll soon get bored with, but there is something to be said for positive reinforcement, even if it is just a computer program ticking in the background.

Anyone have any other tips for creating productivity?

Cheers,
Janet Miller/Cricket Starr
Posted by Janet/Cricket at 6:00 AM No comments:

Email ThisBlogThis!Share to TwitterShare to FacebookShare to Pinterest
Labels: technology and writing

You'll be reading this blog entry when I'm on my way through Rocky Pass and El Capitan in Southwest Alaska, two tricky passages we'll traverse for the first time on our way to Dixon Entrance.  Not only are these routes serpentine and narrow, but they are shallow and we'll need to watch out for strong currents in some places.  So you might ask why we don't take a less tricky route on our way south.  Good question.  One reason is this is a shorter 'road' to Dixon Entrance.  Better: other boaters tell us the scenery is gorgeous.  My husband would add this reason: this is a challenge for us and a new experience.

We've enjoyed returning to familiar places on this, our last trip to Alaska by boat, but we've taken pleasure in new experiences as well.  Take a look at our journey in our blog: http://steveandrolynn.blogspot.com/  and follow our 'bread crumbs' on our SPOT GPS (you'll find the site on our blog).

Happy summer to you all.  Forgive me if I don't respond to comments...I won't have access to the internet for all of July.  Rolynn 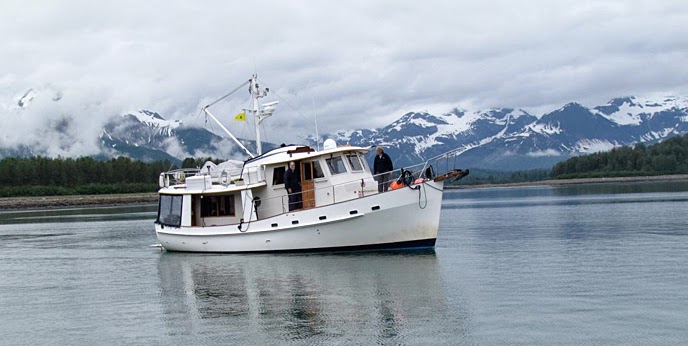 Posted by Rolynn Anderson at 1:00 AM No comments:

Self-imposed deadlines and why they're good

I've discovered that if I set a deadline to finish a book, then lo and behold, the book gets done. I set a very tight deadline for myself for the latest book. I started it on April 17 and I wanted it done by July 1.

Well, I didn't hit July 1. I hit July 7. But I was traveling for 2 weeks in there, and we had 2 trees land on our house during a tornado, so I was a bit distracted. I counted up my writing days, and it took me 62 days from start to finish.

I think deadlines are critical because otherwise it's way too easy to procrastinate, or wander while you're writing. If I have a firm deadline, I'll stay on task and keep my story in check. It's sort of amazing to me that after 7 years in this business, I'm still learning what works and what doesn't.

So on to the next deadline -- I haven't set it yet, but give me a week or so to relax, then I'll be itching to write again.

J L
(summer book out just waiting to be read!)