An Author and an Officer: Stephanie Burkhart

It is my pleasure to introduce Stephanie Burkhart, a multipublished autor and officer who served in the Army for eleven years. Stephanie will tell us about: 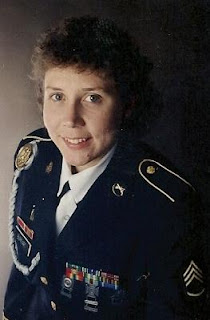 I'd like to thank Mona for having me today at Voices From the Heart to promote my book, "Destination: Berlin."
Just a little about me: I was born and raised in Manchester, NH with a hungry appetite for reading gothic romance, especially by Victoria Holt. I served in the Army for 11 years from 1986 to 1997 and spent 7 years in Germany. My time in Europe inspired two passions – my love of history and the paranormal. Currently, I live in California and work for LAPD as a 911 dispatcher.

Destination: Berlin is a "sweet" military romance. When the Berlin Duty Train is derailed in the middle of East Germany, American Corporal Sharon Cates must rely on help from an unlikely source – Soviet Jr. Sgt. Dimitri Nagory to make it to safety.

Destination: Berlin was the first book I wrote. It was released in 2001 and updated in 2007 with maps. The story was inspired by my own trip to Berlin on the Berlin Orientation Tour in July 1988.

I arrived in Berlin at 0600 am, after leaving Bremerhaven at 1000 pm the previous night. Travel to West Berlin through East Germany could only be a night and the windows in the train were covered.

I had a decent night's sleep and our tour guide meet us right away. He took us to rooms on Roosevelt Barracks. After getting settled in, we were off.

Berlin was a divided city in 1988, and a wall still surrounded West Berlin. It was full of graffiti on the western side, barren facing east. The West was a thriving city with buildings full of color, parks, and the sounds of an urban hub. 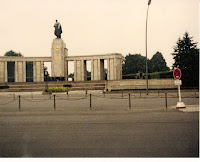 One of the places I stopped to see was the Soviet War Monument in the American sector (Tiergarten). It was guarded by two Soviet soldiers. Historically, the Soviets arrived in Berlin first and thought the land the monument was on was going to go to them. When the city was officially divided, the land went to the Americans. They allowed the Soviets to guard it.
The Soviets were notorious for putting up war monuments in Berlin. The most famous is Treptower Park in East Berlin. It houses 5 mass graves with 1,000 soldiers buried in each grave. I had a chance to visit this park in 1988, but I had to wear my dress uniform (minus my nametag) to clearly identify my affiliation with the US Army.

The Americans had no monuments. In 1987 Rudolph Hess finally died in Spandau Prison. (Interestingly, the Americans, British, French, and Soviets switched guard duty on a monthly basis). As soon as he died, the British demolished the prison. 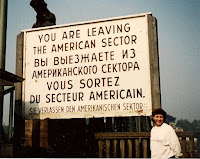 I also visited the Brandenburg Gate, looking at it from the west. The Berlin Wall was right in front of it, filled with graffiti. In 1990, I would have schnapps under the Gate itself while I celebrated New Years with my fiancé.

East Berlin was dull in color. Buildings were brown and gray, covered in soot from burning coal. The most modern buildings were from the 1950's and constructed in dull colors with panels of glass.

I visited Checkpoint Charlie, the only official place to enter East Berlin from the West. I also went to Wansee Lake, a natural border between West Berlin (the American sector) and Potsdam. I also walked on Freedom Bridge, where spy exchanges were frequently conducted. In fact, the Wansee and Freedom Bridge play a big part in the novel's end. hint, hint. 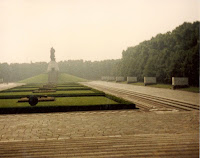 I visited in 1990, 1991, 1992, and my last visit was in 1996. In 1996, East Berlin was gaining color and old sooty buildings were getting face lifts. The wall had been completely taken down, uniting two cities. Brandenburg Gate looked like new.

The four allies had left the city by 1996. Now, Berlin is the official capital of a united Germany. The history of Berlin is rich with accomplishments, yet tarnished by war, but one thing is true now as it was then – Berlin is a vibrant, international city which captures the heart of the German nation.

Excerpt from Destination: Berlin
"Have you been to West Berlin?" asked Sharon.
"A couple of times."
"Where did you go?"
"I visited the old Reichstag, Spandau Prison, and the Soviet War Memorial."

"Which place impressed you the most?" Sharon asked.
He put the olives aside and stretched out his legs. "Spandau Prison."
"Why?"
"I went there last year before Rudolph Hess died. It was a fortress. The prison itself was an old brick building surrounded by electric and barbed wire. The walls were thick and sturdy, yet Hess was very frail. It didn't seem appropriate to the prisoner," Dimitri replied.
"What sector of Berlin is the prison in?" she asked.
"The British sector. Every month the guards of the prison rotated between the allies and I accompanied Major Orlov to inspect the Soviet Guards in July 1987."
"Hess was an old man, wasn't he?"
"Yes," said Dimitri.
"How did he die?" Sharon asked.
"He committed suicide," Dimitri answered.
"Do you think Hess should have had more freedom in his waning days? Maybe he would have lived longer," said Sharon. She was impressed with the fact Dimitri had seen the Nazi before he had died.
"Perhaps. Perhaps not. He was part of a nation that aspired to dominate the world and no country should be allowed to impose its will on another. That's why we aren't successful in Afghanistan," he replied.
"And why the US was unsuccessful in Vietnam," Sharon added. "The suppressed will always mount a resistance that will challenge the oppressor."
"Very true. The Germans found the French resistance challenging in the last world war," said Dimitri. He yawned. "I suggest we sleep here another night and go to Plaue tomorrow."
"Dimitri, one more thing."
"Yes?"
"What happened to Spandau Prison?"
"The British demolished it. The allied government didn't want the prison to become a shrine for any of the neo-nazis," he answered.
"Well, I guess that's one thing our governments have in common."
"I guess," said Dimitri.
She sighed. She would have liked to have seen Spandau Prison. Now it was a slice of history only to be remembered in the books and archives of World War II.

Here's a link to Destination: Berlin's Book Trailer on You Tube: http://www.youtube.com/watch?v=Cuav1ZTlWOA

Goodie Time: Post a comment. I'll pick two lucky winners out of a hat to receive an autographed postcard of the cover. Follow me on my blog tour and earn a chance to win an autographed copy of Destination: Berlin. To find out the dates on the blog tour visit my blog, "Romance Under the Moonlight."

Romance Under the Moonlight
http://sgcardin.blogspot.com/

Steph, what an incredible life and experience. No wonder your books are so lively. Thank you for visiting at Voices blog.

Thanks for having me, Mona. I'm tickled pink to be here.
Smiles
Steph

What an interesting accounting of your time in Germany. We've enjoyed touring the beautiful country a few times and meeting the warm people there. Your story sounds fascinating.

It was nice to get to know you today.

Hi Stephanie. It's great to see you hear. I'm anxious to read your book. Great to see a fellow - NH'ite succeed.

And that is **here** not hear. OMG, and yes, I do use spell/grammar check when I write.

My husband and I were in Berlin last year for the wedding of his son to a native Berliner. We had a grand time, meeting warm people who loved to party--the reception lasted unitl six am. I was taken aback by all the graffitti. Berlin is a lively city; my step-son loves it there. He is a senior programer at Mental Images. Ah, but I am off-track. I loved your blog and the images it evoked. I'm eager to read one of your books...guess which one it'll be. ;-)

Stephanie,
You've lead such an interesting life. Germany is beautiful and I've had the wonderful experience of visiting Mollen because of an exchange student we hosted one year. Even in her 30's, she still calls me "mom".
Mona, thanks for hosting Stephanie for our FTH blog.

Good afternoon, Ladies and thank you for having me. Emma, nice to see you, too! *smiles* no worries. The heroine in the story, Corporal Sharon Cates comes from Kennebunkport, ME, so there' a New England connection.

Vonnie, how exciting to hear that you've been Berlin recently. Sorry to hear about the graffitti though. Did you get a chance to do any sightseeing? Any favorite sites?

Ladies, thanks so much for having me today. Congrats to POSTCARD Winners: Paisley and Emma. Send me an email to sgcardin1@yahoo.com or botrina_buchanan@yahoo.com with your snail mails and I'll get them out to you.

Steph, you made a very pretty officer. My son is in the army now. Just finished boot camp and at advanced training. He has Germany as his first choice to be stationed.

Hi Stephanie, what a fascinating blog. This certainly brings back memories for me. I hitch hiked around Europe with my then fiance (I married someone else!). He spoke fluent German and we visited many places in Germany including Berlin. We hitched a ride in an old VW van with some hippies across East Germany to reach Berlin. I remember being petrified the East German guards would stop the van. We went across checkpoint Charlie and visited East Berlin. My memory of it is exactly as you describe, dull and gray, brown. I remember looking at the sparse goods in the shop windows and being shocked how little they had compared to the plentiful goods in West Berlin. Thank goodness the wall came down and all is now changed.

[url=http://garciniacambogiaselectz.weebly.com]
side effects of garcinia cambogia[/url] is the richest paunchy blazing extract nearby in superstore now a days. Lose upto 10 kg in 1 month. garcinia cambogia select