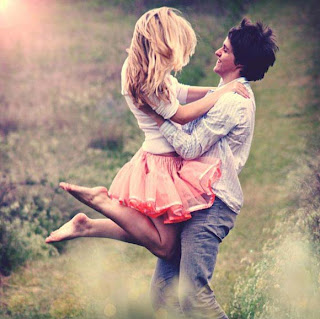 A box of cast off magazines stuffed in the back of classroom was getting a great deal of attention. The students were passing around one battered copy of U.S. News and Report with great enthusiasm. Pages fluttered and it looked like…they were actually reading. What miraculous article could cause an outbreak of spontaneous scanning and giggling? As the class filtered out, I picked up the much-abused magazine to see what might cause interest in both male and female high school students.
The Chemistry of Love title on the front cover explained it all. Ah-ha, I thought as I read a series of articles and sidebars on my planning period learning about the chemistry of romance. When people joke about there not being any chemistry—they are telling the truth.
A study using a pheromone perfume called Falling in Love tested it in a singles bar. Previous pheromones sprays smelled like dirty sweat socks and were not great sellers. This light floral scent is packed full of pheromones, but is less sweat sock like making it appealing to its wearer. The results were astounding.
The participants chosen for their very ordinariness to insure stunning beauty did not draw the men. Within minutes after entering the bar, men trying to catch their attention surrounded the scented women. No wonder, a sex pheromone is chemical signal that allows the opposite gender to know that mating may occur immediately.
The men crowded around the women because the women were putting out signals that they were looking for a mate. The men reacted to the scent while simply thinking there was something special about this girl. Love at first sight can be as simple as chemical messages sent and received. Let’s face it, sometimes we go out the front door looking for love, but little do we realize testosterone is driving us to find that mate. It is easy to joke about teens running on hormones, but we all do.
It really is the chemistry of romance. Guys are big fans of the sloppy, open mouth kisses because they transfer testosterone to the female. The males may not be aware why they prefer this type of kissing only that women respond to the deep kisses by becoming more excited. If things are going well then the female should be feeling weak in the knees because the better-known love-chemical phenyl ethylamine –or PEA is in the bloodstream.
Remember the dopey smiles of friends in love that’s the PEA making everything seem right in the world. Whenever the beloved is near, life is grand. PEA is a powerful chemical whose effects usually peak after 18 months, which is considered the honeymoon stage. Many marriages end between 4-7 years because the body has become used to the levels of PEA that has flooded the system. By this time, instead of thinking what a wonderful guy the husband is, he is considered more of a household drone. One that doesn’t work very well. People talk about falling out of love. To keep that PEA hopping couples have to remind each other what qualities they value in each other. Do unexpected romantic things. Make sure you allow plenty of time for Oxytocin release too.
Testosterone, pheromones and PEA all have a big impact on romance, but Oxytocin is the bigger factor in if people stay together. Oxytocin is released during intercourse causing both parties to feel warm and loving toward each other. Sometimes it is nicknamed the cuddle hormone. Enough Oxytocin and the woman thinks her man is fine even when he isn’t. When the woman is not getting enough Oxytocin, she starts finding fault with her man. The bond breaks down because she does not feel close any more.
It is not surprising that many couples who divorce talk about not having sexual relations in the past year. While they probably did not feel like being close to one another, the fact they weren’t was a contributing factor to the break up. The opposite of bonding is separating. It follows no warm feelings from cuddling after lovemaking; then there will be no bonding. Eventually, couples drift apart unsure what ever brought them together in the first place.

Despite all the songs and poems, we write about love, many times it just comes down to chemistry. There have been plenty of devices to facilitate romance from honeymoon hotels to massage lotions, but scientists are working on a bigger breakthrough. The love spray is a nasal spray that will stimulate the feeling of being in love. For someone who has lost that loving feeling, one sniff should be all it takes to get it back. Scientists believe the timeline will be almost ten years before the spray is on the public market. Until then, light the candles and slip on some Marvin Gaye music. If Marvin’s velvety voice crooning about sexual healing doesn’t do it for you, just remember there is always chocolate.
Posted by morgan at 2:30 PM

Excellent breakdown of the chemistry of love, Morgan. I've researched this for my own stories, and find it absolutely fascinating! Thanks for sharing!!!

Morgan, I keep everything I read about man vs. woman and periodically reread the articles. A great reminder of the primitive instincts underneath our cosmopolitan lives!
Thanks for sharing these insights. And...I'm a fan of Marvin Gaye!

Morgan, what an interesting post. I am a chemist and wish someone had hiven us a course in the chemistry of love, instead of chemistry of colloids or chemistry of polumers. How can testosterone be transmitted by French kiss? Is it present in saliva? What are women transmitting?

Great post, Morgan. Psychology Today talked about MHC in an article titled THE SMELL OF LOVE. They explained how birth control pills mask MHC, a basic mating indicator. Which can lead to choosing a poorly suited mate. Fascinating stuff, eh? And, perhaps, one reason for high divorce rates. Ah, that the answer could be that simple.

Morgan, very interesting post, but chemistry doesn't seem as thrilling as just the romantic idea of 'love at first sight.'

Mona,
It all starts to make sense when you know what could happen. The testosterone is in the saliva--that's why regular kisses won't do.
I still believe for the sake of romance that if he is a bad kisser--it doesn't matter how much testosterone is present.:)

Hi Sheila,
Interesting tidbit about birth control causing you to pick a mate poorly. That explains it.:)Another tidbit I read is working women with healthcare tend to choose more effeminate men. Maybe because they don't need someone to protect or provide food for them. :)

I like the ideal of love at first sight. I especially liked Ricardo Montablan's story about how he met his wife at a party. He knew she was the one. She must have agreed because they married two weeks later. One of the celebrity marriages that did last.

Morgan,
Great post about a subject which should get more attention. The sense of smell is a very powerful one.

Hi Joanne,
My family is blessed with a superior sense of smell, which has led me to believe most scents are not that pleasant.Dogs have been able to sniff out camera with 100% accuracy. It does make for some interesting imagery.