He Rode Into My Bedroom on a Harley...

Last spring, a submissions call went out from The Wild Rose Press for the Honky Tonk Hearts series. One pivotal scene in our 20-40,000 word novella had to take place at the Lonesome Steer Honky Tonk, just outside Amarillo, Texas. A list of criteria was also included. Could I write something that fit? I wondered.

Several ideas flitted through my mind. I toyed with a few, but none felt right. So I resigned myself to skipping the series. Then one night in bed as I was in that fluttering, fragile state between wakefulness and sleep, a man rolled into our bedroom on a Harley. 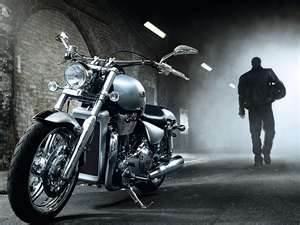 Since I was tired and eager for sleep, I snuggled up against Calvin’s back and closed my eyes. The man roared into our bedroom again. Only this time he got off his bike and adjusted his stance to accommodate his prosthesis. This commanded my attention, especially since I somehow knew he’d lost part of his leg in Iraq from an IED explosion.


He took off his helmet and sat on the edge of our bed. Tormented hazel eyes regarded me. “I need you to tell my story.”


“My name's Win, short for Sherwin, and I’m an ex-Marine suffering from PTSD. The hounds of depression are nipping at my heels day and night. My momma always said the best way to get over depression was to help others worse off than you. So I want to open a ranch for amputee children.” I sat up against the headboard, stuffed pillows behind me and smiled. A hero in war and at home. How nice. “Go on,” I encouraged.

A slow hesitant smile spread. “I just met this girl. You see, she’s got these violet eyes…” 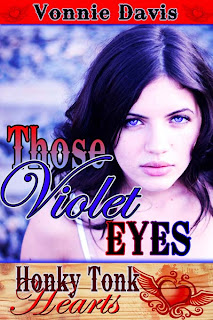 Evie Caldwell hoards every penny for her escape from the servitude life created by a worthless brother and the endless work on a ranch that will never be hers. The last thing she wants is a muscled man with a macho Marine attitude complicating her life. But, oh, how that man can make her insides do a twitchy thing.


Wounded vet, Win Fairchild, returns to Texas to heal, find a piece of his soul and open a ranch for amputee children. Finding someone to love was not on his agenda. Nor was dealing with a wildcat, until she captures his heart with those violet eyes.

But now that he knows what he wants, can Win convince Evie to stay in Texas—and his bed?
Posted by Vonnie Davis ~ Romance Author at 1:53 AM

Oh, Vonnie. This sounds like a sexy story. Good luck with the release!

Great story, Vonnie. That bedroom of yours is kinda crowded...and dear Calvin sleeps through it all! Win and Evie sound like sure bets for a compelling story. Rolynn

Dawn Marie, it is a very sensual story laced with humor and some hard realities. Their interaction was so much fun to write.

Almost all of my heros come to me late at night like that. They also come mid-story to tell me I've written a scene wrong--and of course, that conversation is at night, too. Thankfully Calvin has his hearing aid out and can't hear the conversations. LOL Although since he's a writer, too, he'd understand. He often walks around the house holding conversations with his characters, asking them things. We are two nuts from the same shell...what can I say???

Loved the post Vonnie, Win sounds fantastic! Yesterday at the arrivals hall of the airport, a character came to me. He was a very evil one however, but he was living and breathing and I could see into the very corners of his awfulness

I honestly don't know where these thoughts come from, but the villains almost always reveal themselves to me. Heroes are harder for me (and every woman?) to meet LOL!

Vonnie,
What a great story. You have a winner!

Nicola, ooooh villians. How cool they come to you. My heroes almost always reveal themselves to me. The heroines not so much. I don't get a handle on them until chapter 6 or so, then I have to go back and redo earlier passages.

Thanks, Josie. They were a fun couple to write...what chemistry.