Cover Reveal - 'Just in Time for a Highland Christmas'

Just in Time for a Highland Christmas
A Highland Gardens Novella - Book # 2.5 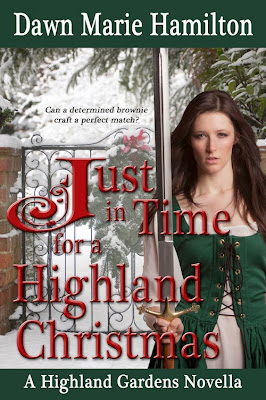 Can a determined brownie craft a perfect match in time for Christmas?

When the Chief of Clan MacLachlan travels to the stronghold of his feuding neighbors to fetch his betrothed, she is gone. A year later, she is still missing. Making life more vexing, a band of reivers are stealing clan cattle, leaving behind destruction. Archibald MacLachlan determines to capture them and administer harsh punishment.

Though once in love with the man, Isobell Lamont refuses to wed her clan's enemy. After running away, she joins the band of reivers set on revenge.

Can Archibald forgive the raven-haired beauty? Will a journey through time bring them together for a Highland Christmas?

~Dawn Marie
Posted by Dawn Marie Hamilron at 12:00 AM