In Search of the Alpha Female 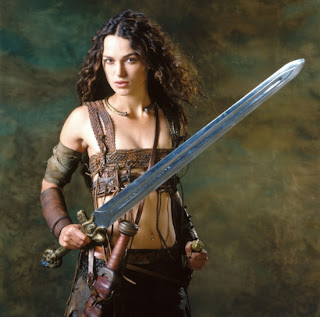 Before my best friend died, he told me I was the strongest woman he knew. This puzzled me since I knew he came from a family of assertive, pro-active women. I figured he was telling me that I managed the hand I was dealt the best I could. That’s what women do. That’s what my mother did when my father died leaving her a young widow. That’s what my grandmother did when she was forced into an arranged marriage at the age of fourteen. History is filled with capable women, alpha females.

It’s funny that women often fail to see this. Men will freely joke if they had to bear children there would be none. Yet men are portrayed as the heroic protector. Any mother who senses her child is endangered will give Superman a run for his money. As women we’re always looking for someone to take care of us; a magical prince who will come and sweep us off our feet. We fail to recognize our own power and ability. We are our own princes.

My first glimpse into the world of alpha female came in a B-movie called Knights. Kathy Long, kick boxing champion, played the reluctant heroine who saves the world against blood-sucking cyborgs. The woman literally kicked butt. She didn’t wait around for some man to step up to the plate to save the human race. That was 1985 and surprisingly movie makers did not run out and started making movies about alpha females. You still have clueless women wandering into the basement to be slaughtered. There also wasn’t a shift in novels. Most of the females characters were just managing until their man came onto the scene.

The change in both movies and fiction was gradual with women taking non-traditional jobs and doing them well which reflected popular culture. A woman could hold down a career and have a man, but it was a hard fight. Most of these alpha women were bitchy, conniving and unfaithful. On the website, Askmen.com, it states that men like alpha females because they are so much harder to catch. It also states alpha men should pursue alpha females because they will never be happy with a submissive beta.

In Sherry Argov’s book, Why Men Love Bitches, it points out why the alpha female is so attractive to men. She isn’t there to serve his needs, cook his dinner or sit beside him and watch another episode of Bass Masters. The very fact that she isn’t waiting on him hand and foot makes her more desirable. It’s ironic men realize this, but most women don’t. She is a person not a household appliance to make the man's life easier.

Who hasn’t listened to a friend, relative or co-worker complain that a man she’s pampered, either ignores her or insults her. Why should he try, he knows he has her 100% under his thumb. For all her carping, she’ll go home to do the laundry, fix dinner and pretend to be interested when he talks about work. Despite the women who continue to be the doormat, the traditional helpless female image is changing.

Remember all those movies with the stupid woman running from danger then she trips and falls. Usually she dies or at best is tortured while the brave alpha male searches for her. There are so many things I want to tell her. Get rid of the stupid heels, Grab something heavy. You can’t outrun bad things you have to face them head on. No one is coming to save you so you need to do it yourself. Too bad she can’t hear me.

I watched the latest Harry Potter movie with my daughter and was amazed at what a strong character Hermione was. Both Harry and Ron admitted they were nothing without Hermione’s magic. As for wandering in the forest alone, Hermione can not only protect herself, but Harry and Ron too. Just to show how smart Hermione is she did not wear heels, but carried a purse that contained everything a person might need for survival. That’s my kind of alpha female.

The changes we are seeing are appropriate to the culture. I guess the real question is when does an alpha female become too alpha? Or is it even possible to be too alpha?
Posted by morgan at 12:01 AM

Interesting post. There is a fine line between an alpha female and a bitch. e all know strong women who step on people's toes and make others mad when they make it happen.

Hmm. Interesting idea. I'll have to think on it. :)

Hi Ana Morgan,
I am reading more books with strong capable alpha females in them. They always seem to want an alpha male.:)
There are plenty of story arcs out there just waiting for alpha females to inhabit them.

Hi Robin,
On the other hand, I've worked with women who initially seemed like bitches who turned out to be some of the biggest hearted people in the whole company. Often alpha women are misunderstood.

Brenda,
When you come with an answer, let me know since I don't know.:)
Morgan

I always whimp down my heroine when I start a story, but always seem to catch it before going too far into the story and fix it. I am old and come from the generation where women took care of their hubbies and children and if there was time, would take care of themselves. Over the 42 years I have been married, we've changed and now I can see it works better as a team. I like alpha women to a point because the flip side of the coin would be a heroine who is too dumb to live. It would be nice to see a compromise on both sides and come up with a strong, independent woman who has compassion. I don't like the woman who enjoys making a man look like a fool.

Interesting outtake, Morgan. To me there's a fine line between being labeled strong vs. being overly aggressive/bitch. I guess it just depends on the situation of the moment.

Your post raises a lot of questions, Morgan, and they are all good. I like a strong female---but not too strong. It's a fine line when you're writing one.

Great post, Morgan. You gave us all a lot to consider. I love strong heroines. My only limit is that I don't want them to constantly humiliate the hero. Whether he's working with her or against her, he should still be heroic.