What Type of Vehicles Do Your Favorite Characters Drive? 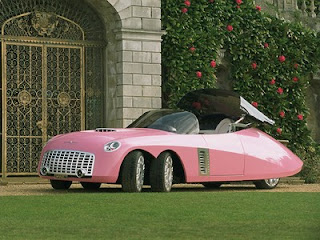 The chauffeur, Parker, is my favorite character in the movie Thunderbirds. I love the fancy pink Ford-designed car he drives. Owned by Lady Penelope, the car gives us insight into her character. The same can be true about vehicles in books.

What does the vehicle used by a character in a book tell us about the character's personality or situation, or mood of the story?

In a fantasy novel, the heroine might fly high above the village on a horse with wings such as Pegasus or on a dragon's scaly back to reach a distant land. As the reader is seduced into the story, they develop a fondness for the woman because she overcomes her fear of flying to save her people and she develops a magical bond with the animal.

Another character might get from point-A to point-B in an historically based story on a velocipede—an early bicycle where the rider uses his feet to propel himself. The reader is drawn to him because of his simplistic life. Maybe as a counterpoint, the villain rides in a fancy carriage with a ducal crest, flaunting his noble lineage. The sexy hero drives a fast and dangerous phaeton pulled by a matched pair of horses from the finest breeding stable, displaying his skill and daring in front of the heroine.

In a gothic paranormal, a vampire travels on the wings of a large hawk over a castle, setting a dark mood.

With a steampunk novel, a character might be the pirate captain of a steam-powered airship whose honor is evident in the way he respects the laws of the sky. Or a wealthy merchant traveling in a private luxury boxcar on a steam train who first appears frivolous until he removes his cape and the reader learns the reason he desires to travel alone—his mechanical prosthesis arm would cause him to be shunned.

The character of a contemporary might drive a pimped-out hearse to hint at his contrarian's traits or a top of the line black sedan with tinted windows to declare his wealth. Whereas the tattooed hero from an urban fantasy cruises the city on an awesome crotch rocket to fuel his bad boy image.

What about futuristic vehicles? I'm sure you can think of some cool space vehicles that say something about the character(s) that flies them. 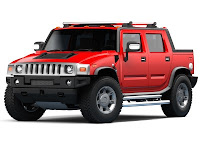 In my uncontracted Garden Gate series, Finn appears as a minor character in the first book. He is the CEO of a business consulting company who loves history and genealogy and on weekends participates in Scottish reenactments. As a sign of his wealth and status, he drives a super truck. That is, until a NYC magazine names him the Best Catch in Manhattan and marriage seeking woman stalk him. 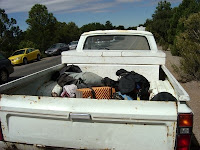 His cousin calls him out on his choice of vehicle as a means of flaunting his wealth. As the hero of the second book, he drives an old beater pickup truck to keep a low profile. But when the Fae have their way, Finn is tossed into the past with nothing but his kilt and the tunic on his back. Oh yeah, and a very special sword. He's more than happy to have a borrowed horse as his mode of transportation.

Read excerpts from the Garden Gate series at DawnMarieHamilton.com

I modified this article from one I posted at Castles & Guns in July. At the time, Author Theresa Meyers commented: "My latest Vampire hero drives a Bugatti Veyron, sang noir edition. One of the fastest supercars around (courtesy of watching BBC's Top Gear). When I found out the sang noir edition (black blood - which is what my vampires have) could be ordered with a crimson red interior, I knew it was the car for him." Doesn't that sound sexy?

Thanks for stopping by. I expect to be off-grid for a few days and will respond to comments when I have access to the internet again. Have a great weekend!

Dawn,
What a fun and interesting blog! I've never thought about vehicles for my heroes, as my manuscripts are set in Tudor England. I spend my time naming horses.

Dawn, each of my heroes drives a special car that matches his character. From Ferrari to Porch, for the sophisticated playboys, to an old Russian car without seat- belts for my two Russian heroes. The heroines are more humble--or less flashy-- in their choices.

Josie, In my mind, horses are vehicles in historical romances. The type of horse a character rides or the type of carriage he drives says a lot about his character and/or circumstance. Thanks for stopping by.

Mona, Maybe one of your heroines should drive a flashy car in a future story. Might be fun. Thanks for dropping in.