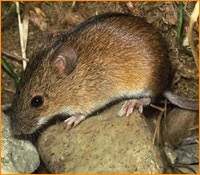 It is fall and winter is slipping around the corner with a vengeance. No wonder a black field mouse crept in probably when we left the door open for our cautious Boxer. He likes the door opened very wide. Once when he was young one of the children allowed the door to touch him, more likely slam on him. Now I have to stand at the door and urge him to go out. Most of the family isn't that patient and simply prop the door open, thus in came Fernando.

My daughter texted me while I was at work and informed me that Fernando, yes, she named him, and friend were peering at her while she was watching Fellowship of the Ring for the umpteenth time. I urged her to chase them out by opening the sliding glass door and run screaming at them (a time honored family tradition), which she did try. They appeared not to want to go out despite her effort to herd them in the right direction.

It wasn't the right direction for them. Some primitive instinct informed them that since old man winter was breathing down their necks they needed to find a warm, safe burrow. Unfortunately, they thought they found it underneath my skirted loveseat in the family room. Were they unaware that I just steam cleaned the carpet and the furniture?

This was really testing my ability to live in peace with nature. The last time this was tested was when a pair of mating Mallards tried to make the backyard swimming pool their new home. The Mallards' desire was strong, but perhaps not as strong as my voice or throwing arm. I tried the peaceful solutions first, which included chimes, pin wheels, blow up alligator floats to no avail. Finally, I resorted to running laps around the pool, yelling insults, which had to make the neighbors wonder if they were directed at them.In absolute frustration, I threw a scrub brush in the air and the bird flew into it. No kidding, despite the fact he flew into it, he took it as a not welcome sign and moved on, taking his mate with him.

I've tried the peaceful solutions with Fernando. My daughter wants him to live because he is so cute and small. Fernando is just a rodent-sized frat boy hoping to get by on his good looks and questionable charm. Even now, I can hear him by the fridge. Soon he will invite all his frat brothers to my house, of course he'll call it his house. All his mice friends will munch down on dog food since my dog doesn't seem to particularly like it. They'll dine on any tasty cheddar nibble left in the traps.

"She does put out the best cheese for me," Fernando will brag to his furry friends as he plucks a another piece from the trap. He aggravates me so with his bold ways parading across the kitchen while I type. My ninety-pound Boxer looks at the mouse, then me, as if saying, "Aren't you going to do something about that?" Since my daughter was gone at school, it was time to put an end to Fernando. I pulled out all the appliances and chased him around with a spatula. Quite the nimble, and resourceful fellow. When it looked like certain death he ran up my pants leg. Argh, talk about distracting me.

This is war, Fernando. I pulled out the bottle of bleach. When besieged by mice or ants, I wash everything down with bleach. I can endure the stink, and I am also gone ten hours of the day. My little unwelcome visitors are very close to the smell. I also believe that I am wiping away all the mice germs.

Fernando has to go. You know what mice bring, don't you? Friends, lots of them, while I was hoping for company for the holdiays I wanted the two legged kind. I need help, tell me fellow warriors your tricks of relocating the little critters, be it fair or foul.

Breaking News: Since orginally writing this post two weeks ago, Fernando and NINE of his friends bit the dust because of my Mouse Warrior fiancee. This just shows an engineer can outsmart a tiny rodent any day.Because my sweetie did the trapping, I decided that I am still in harmony with nature.:)
Posted by morgan at 5:00 AM

Email ThisBlogThis!Share to TwitterShare to FacebookShare to Pinterest
Labels: mice in the house, ridding the house of mice

Oh, hon, I laughed so hard. What a delightful post. I can't handle mice or bugs, so I'd have packed up and moved out. You're a brave soul.

Thanks Vonnie. As I type Scott is resetting the mouse traps. It has rained here for almost two weeks straight I can understand why they want to come inside.

Morgan, loved your tail...sorry tale of the mouse in the house.

Can't stand bugs or rodents, he would have been quick history in our house.

Thanks Jill. The mice are out there waiting for me to open the garage door so they can rush in out of the cold, but I'm ready for them.:)

I SO feel your pain, Morgan. BUT, in our house in the woods we have extra friendly squirrels that think they have the run of the house inside the walls. It makes us nuts hearing their little feet pitter patter overhead and then when they gnaw on something we fear it might be the wiring. The final straw was seeing the head of one of them sticking through the hole in the ceiling of the bathroom. NOT FUNNY ANYMORE!! My warrior hero got a trap and now transports any squirrel that finds himself inside with a door slammed behind him.

Hope you don't have anymore boarders moving in. :)

I have known to scream and jump on a piano stool when my cat brought in a mouse, and that was over 25 years ago. Yes, unfortunately, mice bring many friends, as Fernando proved.