The end of the year always makes me think of the year passed, and the year ahead.  I’ve never been a big “resolution” maker.  Mainly, because if you don’t accomplish them…that can make the new year suck.
But, I do try to set goals.  For me, there’s a slight difference in the two.  One puts me closer to where I want to be in life, and the other makes me feel like crap when I don’t accomplish it.  I know subtle, but it’s there J One of those goals was that by a certain age, I’d return to my hometown, and open my own business.  I’m here!  (I’ll have to keep you posted on the rest.)

This year, I spent the first Christmas with my family and friends in TN that I’ve spent in over 10 years!  Having lived outside of TN for over twenty years, I normally switched off the holidays with my ex, which is probably why Thanksgiving became such an important time of year for me.

Being only inches away from my niece and nephews as they opened their gifts, instead of mailing them and hearing from my brother of their excitement can’t be explained.  Spending months in my hometown, becoming a part of my family and the community I’d moved away from for so many years inspired a short story that I wrote for the holidays, Christmas’ Journey.

Christmas’ Journey is one woman’s attempt at giving back something to the community she loved.  Maybe, along the way, she can find a little holiday magic to help her, not only in giving back, but in finding a long-lasting love. 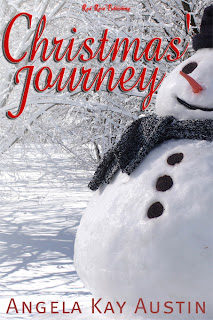 Blurb:  Christmas Davis wanted to give something back to the community she loved.  But, that opportunity was lost to her.  Although won by another, would his ambitions allow him to help those in need?
Presley Marino knew she might say no, but she was the only person he wanted.  Together, they could change things in the hometown they both loved.  That part would be easy, but convincing her and his brother wouldn’t.

Would they allow an uneasy history to silence a need for change, or would they force a new beginning?
I hope that y’all are enjoying your time with family and friends!  And I wish you all a Happy New Year!

It is so good to be close to family, not only during the Holidays, but all the time. I'm glad you are home now. And Christmas Journey is inspiring. I get chills thinking that your character, Christmas, is actually taken from your own life. Great!

Have a wonderful New Year!

Happy Holidays Kaye! Thank you for such a wonderful compliment!

Hi Angela,
I'm chiming in late to second Kaye's comment. Hope that you and your family have a wonderful new year, also.

Hi Angela, you're so right about the resolutions we try so hard to accomplish. And fail.