ANTS AND SELF-DOUBT by Vonnie Davis 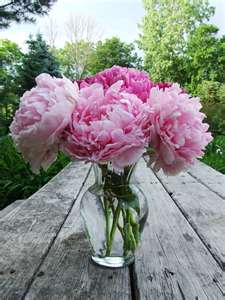 I like flowers with  a strong bouquet, or smell. Lilacs, lily of the valley, hyacinths and peonies, to name a few. Peonies are a common flower in South-Central Pennsylvania where I grew up. What I remember most, next to their delicious smell, were the ants. The buds seemed to attract large ants who slowly crawled over them as if it were their job to open every bud on the bush. 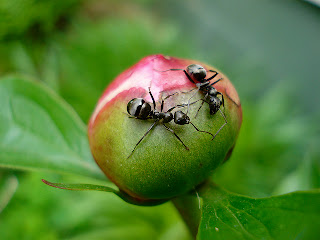 What was the ants' purpose? They were only present during the time the blossoms opened. 99% of the time, the flower held no attraction for the insects. So why did they come?
The Heartland Peony Society says this is a natural and temporary activity. It is believed that peonies produce small amounts of nectar and other ant attractants to encourage ants to help in opening the dense double flower buds found in many peonies. Once the buds have opened, the ants disappear. 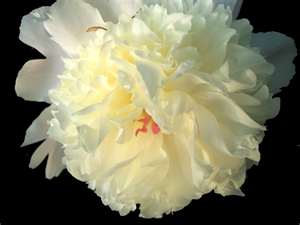 If only our self-doubts were the same way. They come to us like those pesky ants on the peonies and crawl over our dreams and ambitions. What if I can't finish this book? What if I can't get a contract? What if I can't sell any books? What if the book I just published is the only one I'll ever be able to write? Oh, yes, the creepy-crawly sensations of self-doubt. 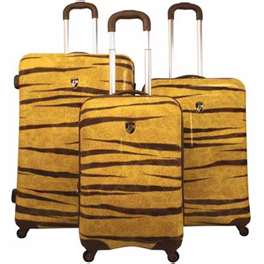 I remember shortly after signing my first book contract, Ms. Self-Doubt knocked at my front door with a three-piece set of luggage. She sashayed into my home as if she were my honored guest. "Oh, I'm here, my poor dah-ling." She breezed air-kisses off my cheeks. "I know you're thrilled with your little contract, but I've come to help you accept Storm's Interlude was the only book you'll ever be able to write." 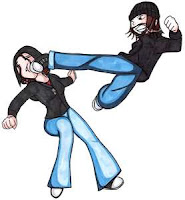 I kicked her out to the curb--her AND her three-piece set of luggage. I can joke about it now, but at the time I really struggled with self-doubt. And, if truth were told, I still do. I suppose it's odd for me to say that with three more projects under contract. Still, my debut book has garnered some lovely reviews. What if the next ones don't? What if a reviewer says a subsequent book didn't live up to the promise of the first? Could happen, right?

I think all artistic people struggle with inner fears and nagging self-doubts. They are the ants of our creative flowers. Only by facing them can we overcome. Keep working. Keep writing. Keep moving your artistic career forward. Work through those self-doubts. Send those ants on their way.

Posted by Vonnie Davis ~ Romance Author at 1:14 AM

Great post, Vonnie. Those ants are so annoying. Where is the bug spray? Self-doubt is so annoying. Sucks the energy right out of a writer.

Today is a new day. Dare to dream!

Yes, Dawn Marie, self-doubt can be very powerful. So can our dreams if we allow ourselves to pursue them. Thanks for commenting.

I always love reading your posts, Vonnie. You're so wonderfully inspiring and yet so down to earth. I suffer from self doubt big time. There are days when I can't write because Ms. Self Doubt is choking me. It's comforting to know I'm not alone in it, because doesn't she just manage to convince you that it's only you that has this problem? At least she does for me. It's definitely hard kicking her to the curb, so thanks for the kick in the pants.

You're a strong woman, Vonnie, so I have no doubt you can vanquish your self-doubts. As each book comes out and gets more good reviews, you'll find the doubts fade into an occasional annoyance. Just wait and see!

Terrific post Vonnie! I think everyone has those self doubt moments. Some days I can kick it to the curb too, and some days it eats me alive. Funny how we all let Ms. Self Doubt work her way into our home...but also good that we don't let her stay long when Mrs. Confidence comes a calling!

Great post, Vonnie! I too love the fragrance of all the flowers you named.
And I too struggle with the dreaded doubt-demons. I guess it just comes with 'the job' of writing, but gosh I wish they'd go away! LOL
Hugs!
Jennifer Jakes

JoAnne, I think self-doubt is the curse of the creative mind. Perhaps that's one of the reasons so many artists, musicians, actors and writers resort to drug and heavy alcohol use--to escape those doubts. You are not alone. We all have them, sad to say.

Thanks, Jannine. I hope you're right. Battling self-doubt is such a time suck, isn't it? Yet, we either battle it or succomb to it. Grrrr...

Hi Jennifer, I truly believe self-doubt is the curse of the creative mind. Perhaps its ying to its yang. Thanks for stopping by. Oh, and anyone who can create Rafe, well...kick Ms. Self-Doubt to the curb big time.

I struggle with self-doubt all the time, Vonnie. And I have two new releases, one coming the end of the year, plus a new contract! I think it stems from poor sales figures. I want people to read what I write and if they're not buying, that means they're not reading. I do keep plugging along, because I must, but sometimes I let that self-doubt creep in. On those days, I usually end up reading someone else's book or an article on writing and that gets me back in a better state of mind.

Great, honest post, as usual, Vonnie. Maybe whenever we find ourselves plagued with ants/self-doubt we should start thinking of it in terms of what we can proactively do to move beyond it. I always feel better when I take action. Maybe it means we should take a fun, educational online class. Maybe we should go buy a new writer's book. Maybe we should try a new activity that one of our characters might be involved in. Doubt always echoes loudest in the minds of people who don't act. My 2cents, for what it's worth. :)

I suppose that being a professional worrier - and trust that I do it very well :) - having self-doubt goes hand in hand with it. I was blessed with a contract for five stories and - yep - I worry that each one is as good as the first. I suppose it is natural, but I get angry with myself for doubting my writing. It's something we all learn to live with, but I fight it every day. Maybe it's what keeps me working at making each story better.

Susan. Poor sales figures? Oh, girlfriend, don't even get me started on that. **slaps forehead** I keep hoping as I get more works out there, readers will slowly recognize me. I hope that's not erroneous thinking on my part. Let hope both of ours start increasing. Meanwhile we do have the enjoyment of writing--and I SO enjoy what I do.

Paisley, if we use self-doubt as an impetus to strive harder, write better, create those sensual worlds our readers want, then we've turned a negative into a positive. That's what I keep telling myself. Twist the bad until it gets reshaped into something good. Hug, hon.

Great post, Vonnie, and so true. From the time I toyed with the idea of writing to now, I, too, have self-doubt. Every step, despite how small it may be, helps, but I don't think it will ever go away completely. I just try to silence it long enough to chase my dreams.

Great post, Vonnie, and so true. From the time I toyed with the idea of writing to now, I, too, have self-doubt. Every step, despite how small it may be, helps, but I don't think it will ever go away completely. I just try to silence it long enough to chase my dreams.

Self-doubt hopefully only pops its ugly head out occasionally-otherwise would we have the strength to leep on going? Personally i hate those pesky little ants crawling over my shoulder...grr...

It's the ants making me make typing errors too, BTW.

When I told my husband that I was afraid I'd never sell a book he said, "It doesn't matter to me what anyone thinks, I love reading your stories. Write them for me and anything else will be a bonus." That works most of the time.
Also, I envy everyone who has peonies. I love them so much, but they can't grow in Florida.

Krissy, thanks for stopping by. Thanks, too, for your congratulations on the book contract I was offered today. It's major "SQUEE" time here at the Davis household. Kiss that adorable son for me.

Hey, Nancy, a poor excuse is better than none. Those ants cause me to make typos, too. Yes, you're so right, if we allow ourselves to pay too much attention to our self-doubts, we'll never accomplish anything.

Oh, Sandra, you've got a real keeper there. My Calvin is my biggest cheerleader, too. He's helped my writing career so much. Thanks for stopping by.

Great post, Vonnie. You have a great way with words. I love how you say our inner fears and nagging self-doubts are the ants of our creative flowers.

Thank you, Katherine, you're too kind. I think we all strive to paint pictures with out words.

Fantastic post, Vonnie. I love the analogy with ants and self-doubt. When you mentioned ants destroying the beautiful pionees, I thought you'd talk about the nasty reviews that try to destroy authors who are bestsellers.