[SPECIAL ANNOUNCEMENT:
SAILING WITH YOU A story full of passion, humor, and emotion, set in the Greek Island of Mykonos. Offered as a FREE PROMOTION for 3 days at Amazon. http://tinyurl.com/7xwp8eo ]

Have you ever been witness to a crime?
Or been present during a traumatic accident?

I bet that if you did, you may have had trouble forgetting it.

Several years ago, a man drowned in the Jacuzzi of my building. Although I wasn’t present, several of my neighbors talked to him a few minutes before the incident happened. 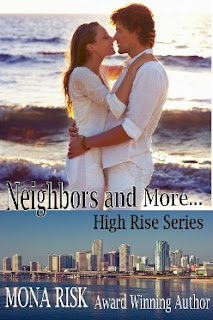 A person standing on her balcony saw him sprawled under water and called 911 and the front desk security.

The man was in his late thirties. Athletic and handsome. He had a few drinks and was kind of drunk as reported by those who talked to him while he was on his way to the hot tub. Apparently, the alcohol and heat made him sleepy and drowsy. The report said he slept and slipped under the water.
They closed the hot tub for months, but even after they cleaned and disinfected, I never, ever stepped in it again. And then we moved. I never forgot that story.

Blurb: High Rises are like large families where members face love, hate, meddling, and gossiping. When the neighbor who was harassing her is found dead in the Jacuzzi, Alexa is a suspect. Can she count on her dear neighbors for help?
The lawyer she loves, a mafioso's grandson; her overbearing ex-husband who is trying to keep her to himself; her former friend, the victim's ex-wife, who blames Alexa for her husband's infidelity; the ex-husband’s new girlfriend; the widow's secret lover...


All dear neighbors who may help save Alexa...or incriminate her.
Posted by Mona Risk at 8:56 AM

Hi Mona,
First, thanks for sharing an incredibly sad story about the man drowning in the jacuzzi. It seems like something like that could never happen, but they say that truth is stranger than fiction.

It's true story. I turned it into a romance with suspense and intrigue.

Terry, they reopened the hot tub six months later, but it was a no-no for me.

I love the premise of your book, although the seed of the idea is awful. I wouldn't go back into the hot tub either.

Your cover is great. I do like the premise of the series very much. Don't stop, Mona. You'll regret it. You have me thinking of writing another series!

I love your cover. Very eye-catching. And I like that you plan to have a High Rise series. It sounds so "today".

Hi Keena, you'd be surprise to hear about what happens in the high rises on the beach. Some terrifying stories, and some funny although in a cynical way.

Celia, I am glad you''l write another series. The short romances are not too tiring to right and you know how to pull the reader in from page one.

Maggie, I'm so glad you like the cover. I was agonizing over it. I had to redo my covers three times for the last two books.

Mona, I like the new cover. I think it gives a great sense of what to expect from the story within. Looking forward to reading it!
Smiles
Steph