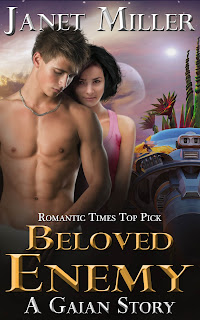 Last month I talked about covers and getting the perfect one for a book. This month I want to continue this theme in talking about the covers for the Gaian books I'm re-releasing next month. The books are Beloved Enemy and Beloved Traveler, and I wanted to make sure the new covers both enticed people to investigate the books and accurately reflected the contents as well.

When working with a cover artist it is very important that you spend a little time deciding what kind of cover you want. In this case I wanted covers that made it obvious these were science fiction romances, with space-themed backgrounds and couples that looked like the characters in the books. Knowing what I wanted made the process much easier. 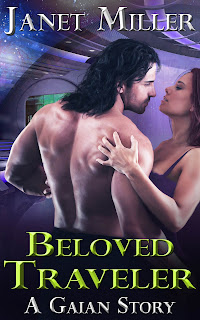 For example if the characters are young, as in Beloved Enemy, you want them to look young. Since the heroine is spaceship pilot who has been stranded on a deserted planet for a while, then I wanted her cover image to not be wearing a lot of makeup. To me, this cover reflects well both the characters of Meagan and Kavath, but also says something about their relationship. He's reluctant to get into a relationship with her while she's a bit sassy about the whole thing. You can see that by the way they are posed.

For the second book, Beloved Traveler, the characters are older, and the images my cover artist picked showed that. Jack and Meagan have been through a lot in their lives and are reluctant to become involved, but can't resist the pull they feel towards each other. The passion they find is obvious in this cover. Again I think this cover reflects well who these characters are and their relationship. 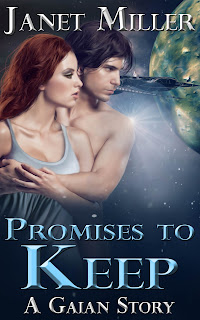 In both covers the science fiction aspects are obvious, a strange planet in the first cover, a space ship control deck in the second.

In the cover for Promises To Keep,  the book I currently have for sale, the space theme is shown by the planet, stars, and space ship in the background.

To make the books all seem within the same series, the fonts are the same, my name is at the top, and the series name is in large letters at the bottom. There is no mistaking that these three books are related to each other.

Maybe you can't always judge a book by its cover, but if the cover is any good, it should be able to say something about the book.

Cheers,
Janet Miller
Posted by Janet/Cricket at 2:01 AM

No covers yet, but I need to start thinking about one. Yours do exactly what you say--indicate genre, characters' age and need. You are consistent in style and layout.

The other aspect of the covers that I didn't mention is whether the cover works to entice readers. The new cover for Promises To Keep seems to be doing just that because the book is on the Space Opera best sellers list and has been since since being released with the new cover four weeks ago. So when it came time to pick a format for the second and third book I asked for a cover that would be in the same style. Time will tell if I'm right, but at least I'm working off a data driven theory rather than guessing what will and won't work.

If one of these new covers doesn't work I'll see if I can't find out why and tweak it.

Love the covers. My sister is now doing mine and it takes a lot of tweaking to make it work and even then, they need to be redone because the reader doesn't see what we see in them. Thanks for sharing.

I was fortunate to have a friend who majored in graphic design, and who understood my vision for the cover of my first book. I have a specific idea of the kinds of romances I want to write, and felt very strongly my covers should all contribute to my "brand" identity.

Here's a link to the finished product: http://lauraoliva-writinginthenight.blogspot.com/2013/02/the-importance-of-having-face.html

Nowadays, book covers must do a lot more than stand out on a store book shelf. There are so, so many self-published books out now, each one competing with the next, and you have barely a nano-second to capture a readers interest. The first thing they see is the cover of your book, so it has to be dynamite. And it has to stand out at thumbnail size on a computer screen. Many covers fail at this.

I'm a published author as well as a professional graphic designer, and have been for over 30 years. I've been designing a lot of book covers lately. I understand how vital it is that the author get what he or she wants to represent their book, plus make the cover enticing enough that readers are compelled to see what's inside.

You can see some of my covers here:
http://duvalldesign.wordpress.com/book-cover-design/

I'll be giving a workshop for self-publishing authors at the Colorado Gold Writers Conference in September on "How To Art Direct Your Book Cover."

I love your covers and appreciate your analysis, Janet. I like "data driven theory." That's a good thing to go for. With my first ever cover coming soon, (just "sold" to The Wild Rose Press), I will have my first data point. It's a start.

Thanks for alerting your SVRWA colleagues to this great post.