Yep, yesterday was my very last day to write a story. 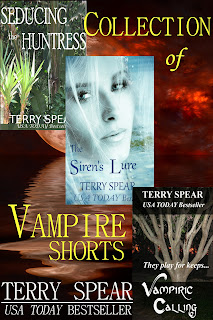 I decided to put my individual vampire romance short stories into a collection. This way readers can read individual ones, or save nearly $2 off the collection and get that one.

The vampire Sarzoven and his sister are bored with life so a death-defying game of seducing the huntress is an attempt at eliminating boredom. But Miranda isn’t about to be seduced by the vampire no matter how sexy he is, not when he’s on her terminal list. Sarzoven soon realizes she’s a dark huntress, who doesn’t eliminate a rogue vampire until she’s sure he or she is truly a renegade.

So why is he on her list? Now he must convince her to remove him from her elimination schedule before she decides he really is a rogue. Miranda knows she can’t permit the vampire from swaying her from her mission, but soon she finds she’s on someone else’s list. But who’s behind this twisted game that’s bound to stir up vampire and hunter hatred alike? And can the huntress and vampire overcome their age old distrust of one another before it’s too late?

A vampire wishes upon a falling star and ends up with more than he bargained for. When he attempts to rescue a woman in distress, he soon learns she's not quite human and not a huntress--or at least like any he's ever known. That's when the seduction begins--but who is seducing whom?

Tristina isn't a huntress in the normal sense. Before meeting the vampire who would rescue her from danger, she never thought anyone could love her for herself. Now, just maybe she's found the right man for her.

Sardis wants nothing more than a vacation from his ponderous role as prince of the New York vampire clans, but ends up having anything but a peaceful time while staying at a beach resort when he meets the most enticing siren. Trouble doesn’t even begin to describe the new world he finds himself in as he tries to seduce her, and he falls under her siren's spell instead.

A vampire targets a huntress for his own, and she's torn between wanting him and knowing she should terminate him. But in the dark of night, who will win the battle?

Samantha Ramsay’s always been different, a huntress born with the gene that makes her kind take up the sword to terminate rogue vampires, yet something isn’t right. They’ve never targeted her before tonight, and now she realizes she can’t kill the sexiest vampire she’s ever encountered, who claims her for his own.

Ralston Vaccarra has waited all the huntress’s life to have her and no one, vampires or hunters alike, will have the woman he claimed for his own the day she was born, only will a huntress be able to accept him and his kind for what they are?


Or the short stories can be purchased separately. :)

Back to writing on Jaguar Heat!

Yes, you got it that my quitting writing was an April Fool's joke, right???

Telling stories is in my blood....

Have a super Monday! And Happy April Fool's!


Terry
"Giving new meaning to the term alpha male where fantasy IS reality."
www.terryspear.com
Posted by Terry Spear at 2:27 PM

If you would like an alternative to casually flirting with girls and trying to figure out the right thing to do...

If you would rather have women chase YOU, instead of spending your nights prowling around in filthy bars and night clubs...

Then I encourage you to view this eye-opening video to learn a amazing little secret that has the potential to get you your personal harem of attractive women just 24 hours from now: