Lisa Robbins has one mission in mind--sell back her UNUSED wedding dress to the wedding shop, but when she has no success, maybe she's going about this all wrong.

Peter Crawford is intrigued by the woman who has somehow hooked Dallas's most eligible confirmed bachelor, Pembrooke Hastings, Peter's staunchest enemy. Not only had she gotten a commitment from him, but she left HIM standing at the altar. Dating the vivacious woman certainly appeals and Peter wants to know just how she hooked Pembrooke, but also why she didn't marry him.

Lisa Robbins is not dating and not marrying anyone, so she assures herself, her family, and her boss. But when Peter takes an interest in her, she's wondering just what to do about Dallas's most eligible confirmed bachelor number two, when he just won't take no for an answer.
B&N Amazon

Kiss of the Vampire 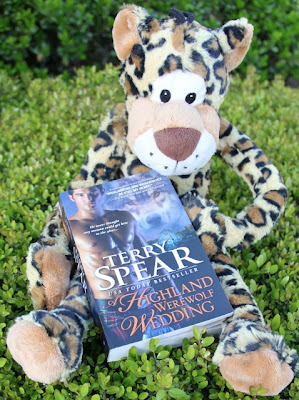 Isn't he adorable? Well, sure, the Highland hunk on the cover, too!! But I found this little guy and fell in love with him. So I picked up four for the four conferences I'll be attending, and can't wait to display them on my book signing tables....one lucky winner will get him. :)

So what should his name be?

I'm all about jaguars right now, doing the final proof of Jaguar Fever, trying to keep up on word count for Jaguar Hunt, but with the new release of A Highland Werewolf Wedding, I had to put this little guy in charge of marketing the book. :)

He loves the cool Highlanders and wants a kilt too. :)

Also, this in from RomFan Reviews!!


Terry Spear and given us another hit to her Werewolf Series.  I don’t think I will ever get bored with her books as each one brings a new a delightful hero and heroine as well as a fun supporting cast.  As much as Cearnach fights the attraction he has to Elaine he cannot help but want to protect her and be near her.  Elaine has had a rough time with men in her life and the last thing she wants is another one ordering her around.  It doesn’t take these two long to realize they are destined to be together but there is someone who will do everything to prevent that from happening.


Who doesn’t like a story with highlanders that are also werewolves?  This series can keep going and going and I will be one of the first in line to buy it.  Kudos to Ms. Spears for another fun filled romance.  If you have not had the chance to pick up one of her books I suggest you start now with A Highland Werewolf Wedding.
Annette gives this book

Have a happy Wednesday!!!

Easy to do!!! And lots of fun. It's nice fun way to make a visual representation of your book titles.

Terry
"Giving new meaning to the term alpha male where fantasy IS reality."
www.terryspear.com
Posted by Terry Spear at 12:00 AM

Fantastic trailer, Terry. I love it.

If you'd like an alternative to randomly picking up girls and trying to find out the right thing to say...

If you'd prefer to have women chase YOU, instead of spending your nights prowling around in crowded pubs and nightclubs...

Then I urge you to watch this eye-opening video to learn a weird secret that might get you your own harem of beautiful women: