Perhaps by the end of the day, Seeking Shelter will be officially out. Here's an excerpt. A lucky commenter can get a digital copy before it is even out. 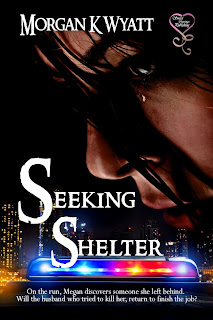 Seeking Shelter Ex. 1
(Denise and Megan are eating in a restaurant when Kevin and a friend enter.)
“Is something wrong?” Denise started to turn in her seat to survey the customers.
“Stop, don’t turn around.” Megan nodded her head in the direction of Kevin.
“Okay, whatever. I do expect details when we get in the car. I feel like I’m in seventh grade again. Maybe you like to pencil a note on your napkin, and I could kick it over to the next table.”
“Denise, could you please talk about something else.” The object of their conversation stood and walked toward them. Oh my, he heard us. Megan was ready to crawl under the table in embarrassment. He was right next to their table, and he kept walking. There was a swish of a door, but she didn’t dare look back.
“Is he still there?” she whispered.
“Relax, Megan. He went to the bathroom.” Denise dabbed at her mouth with the napkin to hide a smile.
“Good, let’s leave now.” She motioned to the waiter for the check.
“What a time for you to suddenly get assertive, just when I was ready to dig into my chips.” She eyed the remains of her club sandwich, which sat beside a generous pile of kettle potato chips.
“Oh, I’m sorry. Could you take them with you? Maybe wrap them up in a napkin or something?” Megan had already shoved her arms into her sweater sleeves and was picking up her purse.
“Absolutely not! That’s something my grandmother would do. I don’t need the fat or the salt, anyway. But I will finish my sandwich.” Denise took enormous bites and chewed vigorously. Wiping her hands, she reached inside the purse for her wallet to pay the bill.
“Hey, I’ll meet you outside.” Megan jumped up like a jack in the box, knocking into someone who was abreast of their table into the next one.
“Umpf,” he managed to utter as he hit the wood table.
“I’m so sorry.” Megan turned to help the poor person she hit, only to realize it was Kevin. She wanted to run out of the restaurant, but realized it wouldn’t be the polite or adult thing to do. The possibility of the floor opening up and swallowing her didn’t look like a real workable option, either. She held out her hand to help the man splayed across the table. It took him a while, pushing himself upright with the one hand while she pulled on the other. His friend had turned to watch with an obviously amused expression.
“I know this might sound odd, but haven’t we met?” Kevin asked, looking into her eyes.
Megan was mortified. “Um, I’m the person who keeps knocking you down.” Maybe she could refer to herself as the clumsiest woman in Louisville. She thought of telling him he was on some type of reality prank show, but discarded the idea.
“Elaine,” he said the name softly.
Denise called out loudly, hoping to rescue her friend from an awkward situation. “Well Elaine, I believe it’s time to go.”
“Oh yeah, time to go. Sorry about bumping into you, again. I will try to be more careful and not hit you again. What I mean–never mind.” Megan turned to hurry after Denise.