There seem to be two kinds of posts in my Facebook feed these days. There are the "hey, isn't this awful" type posts where someone references something that is pretty upsetting. I read some of those posts, and I shake my head and sigh in agreement.

But then there are the awesome posts, the ones where someone did something really nice and we all get to collectively say "Hey, that was pretty cool!"

These are things like Jennifer Lawrence heading off the red carpet at the London premiere of Catching Fire and pushing past security barriers to hug a sobbing young girl in a wheelchair. She literally stopped the red carpet to spend a few moments with a fan who'd been overcome at being so close to her heroes. 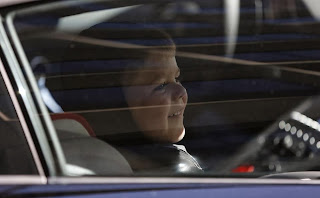 And then there was Friday's day long "Batkid" celebration in San Francisco where the Make-A-Wish foundation took a five year old cancer survivor and gave him the opportunity to play a superhero, rescuing a damsel in distress, foiling a bank robbery, and freeing the Giant's mascot Lou Seal from villains at AT&T park, with the help of what seemed to be the entire city. The fun was tweeted by thousands of people in the SF Bay area as they cheered the little boy on.

It makes my day when I'm reminded how good people can be to each other and how often people go out of their way to make another person's life a little brighter. In a world where the bad sometimes seems to outweigh the good, that's important to remember.

Posted by Janet/Cricket at 1:12 AM

Thanks for sharing, Janet! I so agree! I saw a picture of a cow resting on the hood of a car from the UK police department, with a message that remember animals in cold weather. They like to get close to the heat of cars, so check underneath them, etc. It was photoshopped, but it was tweeted all over the place because it was so funny, but also a wonderful reminder.