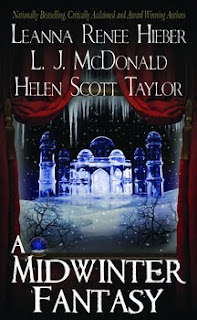 I’m delighted to announce that the next story in The Magic Knot Fairies series has just been released. The Crystal Crib is a novella in the anthology A Midwinter Fantasy, now out as an ebook.

“In the frosty North, in the ice palace of Valhalla, Sonja’s life depends upon unraveling the mystery of the Crystal Crib—and upon winning the love of Odin’s son.”

So far I have drawn on Celtic mythology for the Magic Knot series but in The Crystal Crib I explore Norse mythology for a change. The hero Vidar is the son of the Norse god Odin and the heroine Sonja also has Norse god’s blood running through her veins, although she doesn’t realize this at the start of the story.

In the wintery splendor of Iceland Vidar runs a theme park called Santa’s Magical Wonderland and Sonja’s visit certainly becomes magical when he takes her to the Norse god’s kingdom of Asgard to meet her father.

“Where are you taking me?” she shouted, the wind whipping away her words. Vidar just snapped the reins, making the horse move faster. Out of the whiteness, a deep shadowy ravine loomed in front of them.

Sonja’s heart slammed painfully, and she snatched panicked gulps of arctic air. She grabbed for the reins but Vidar caught her wrist to restrain her.

“You’re safe,” he shouted. A whisper of calm stroked across her churning thoughts. “Sit still and hold on.”

She clutched his arm and pressed her face into his fur-clad shoulder.

“I’m not going to kill us,” he breathed against her ear.

Her rational mind knew his words made sense; her survival instinct wasn’t taking any chances. She dragged her face up and glanced at the rapidly passing ground, wondering if she dared jump.

“Trust me, Sonja.” His words flowed into her, soothing and reassuring.

Then the horse leaped over the precipice. Her breath jammed in her lungs. Sonja squeezed her eyes closed. But the sickening stomach-flipping fall she expected didn’t happen. The sleigh shuddered and bumped; then the ride smoothed. After a few frantic beats of her heart, she cracked open her eyes. Instead of falling, they climbed into the swirling cloud of snowflakes.

With her gloved fingers still fastened in a death grip around Vidar’s arm, Sonja peered down at the snowy valley hundreds of feet below them. She scrabbled to make sense of what was happening. They were at least two miles from the resort, so the sleigh couldn’t be a theme-park ride.

Shocked and angry, she punched him in the arm. “How are you doing this?”

A flash of remorse crossed his face. “I live in a different world from you, Sonja.”

“You’re telling me flying horses are normal in Iceland?”

Her gaze jerked back to the creature pulling the sleigh and her eyes bugged. A huge white cat the size of a tiger strained against the harness. A little squeal broke from her throat. In Norse mythology, the goddess Freya had a flying carriage pulled by giant cats. Like any sane person, she’d assumed that was fantasy.

The other two contributors to the anthology are Leanna Renee Hieber, whose story continues her Strangely Beautiful series, and L.J. McDonald, whose story is set in her Sylph world.

Find out more at www.helenscotttaylor.com.
Posted by Helen Scott Taylor at 6:22 AM

This sounds like an intriguing story. I love your writing--it always brings your readers right into the scene.

Helen, I read that lovely tale and enjoyed every minute of my reading. It will make a great Christmas gift.

Helen,
Thanks for the wonderful excerpt. Best wishes on another successful story.

Thank you Carolyn, Mona and Joanne. I am delighted the book is finally out.

WOW exciting that you have another book out, Helen. Best of luck with lots of sales.

Helen, thank you for the excerpt. Your books always sound so magical.

Reading your excerpt gave me chills, Helen. Sounds wonderful. Good luck with it.

Congratulations on the anthology, Helen. I just love anything to do with mythology. Great excerpt.