Everyone is doing it and considering the less-than-inspiring performance of my small press and legacy published books, I thought I’d give it a chance. Independent publishing. Despite the success of folks like Amanda Hocking and J. A. Konrath, being an indie author still makes me wince. It feels like, well, giving up, or at least settling for less than the best. 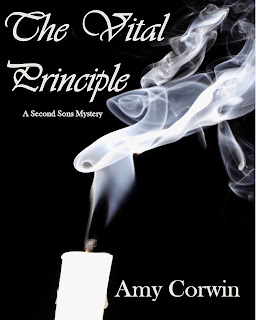 At the end of Feb 2011, I put out my first independently published mystery, The Vital Principle. I’d been talking to a legacy publisher about it, but the editor told me frankly that sales are difficult and they didn’t put out ebook editions, so… I thought about it and decided, well, heck. Maybe I should try being an indie. I felt I didn’t have much to lose.

When my book first came out, I worked very hard to get some reviews, and got some terrific ones. I chatted a little about it, but really, nothing like the work I’d put into promoting my other books. The first month it sold 60 copies, which wasn’t bad. In comparison, my first book published by small press might have finally sold 60 copies after about five years (I stopped tracking it when it failed to sell 9 copies the first year).

This last month, my indie book sold over 200 copies. Today isn’t over, yet, and it’s already sold 11. Sure, those aren’t huge numbers, but the point is, it is gaining ground. My indie book has already sold more copies in its first three months than my second small-press book sold in two years. If it keeps this up, by the end of the year, I will have earned more than the advance on my latest legacy publisher book, not to mention that it will be another year before that book even comes out! By then, assuming all things stay the same, I will have already earned twice what I got in royalties from a legacy publisher.

One of the big questions is, why?

It wasn’t marketing, since I marketed the heck out of my first five books. However, I did change my marketing strategy in a significant way. I became less interested in “look at me!” and more interested in “what can I offer an interested reader?” I also focused more on just chatting with folks. Ironically, during the last month, I frankly did nothing on marketing, and it’s doing even better. Go figure.

The biggest factors to me seem to be the same ones Konrath talks about: covers and price. You need a good cover and with legacy publishing venues, you pretty much have no control. I don’t want to hurt anyone’s feelings because I admire everyone I’ve worked with, so I’ll leave it at that concerning covers.

I also firmly believe that legacy publishers (and a lot of authors) price their books way, way too high. People get twisted around the axle over the price of a single unit, refusing to understand that the value is the revenue stream it generates. Your book isn’t worth $.99; it’s worth whatever revenue it generates, regardless of unit price. My $.99 book is earning more for me than all my $7.00 books, combined. This confusion folks experience appears to be similar to the mindset of those who insist taxes must be raised to bring the deficit down, when the reality is that reducing taxes will create more revenues for the Government because business will prosper and generate more overall income to be taxed. Bring prices down, people buy more. Simple.

Beyond that? I’m still figuring it out as I prepare to release my next indie mystery, A Rose Before Dying, later this month. I do have a big dilemma, though. Should I submit my next manuscript to a legacy publisher, knowing even if they accept it I won’t see it released until 2014? Or should I just suck up my pride and do the indie thing again?

If it was solely about the money, it would be simple: indie. But you learn a lot working with the team you get with a legacy publisher, and I personally enjoy it. I enjoy improving my craft, and the best way to do that is to work with folks who will make you swear, sweat, and then rewrite. It’s not quite the same relationship when you hire an editor, and they never seem as willing to aggravate you as the legacy publisher editors do. Weird, but true.

I’ve babbled enough and have to get back to work. My next project is to finish a holiday novella I’ve been working on for over a year. I’m determined to finish it. Maybe by next year!
Posted by Amy at 3:00 AM

I sold nearly 200% over what I did last month, and 37% over the month before. One of my books: THE DARK FAE, a teen book, has been selling phenomenally. It's not marketing that's selling it. It's just taken off on it's own. Maybe the cover, the blurb, the fae. Not sure. But what I am sure of is that it would never have been available to the public if I had to wait on getting an agent or publisher for it.

I love self publishing! But I love publishing with Sourcebooks, Vintage and Samhain, too. So I do all of them.

I've heard that Christmas stories do well, so good luck with yours, Amy, and with all your future sales!

More and more of my published friends are self-publishing their backlist once they get their rights back - with good results. Given the lag time with legacy publishers, and the amount of marketing time spent on small/e presses with questionable return, I see a real benefit in doing it all myself and reaping more of the profits.

That said, I just signed my second contract with an e-press. I enjoy working with my editor.Dealing with all the other minutae involved is a great learning experience, and will aid me when/if I go out on my own.

Great post, Amy. No advice, but as the internet squeezes costs out of publishing, readers are expecting lower prices. If you're not a Big Name, and the reader sees Jane New Author available for $2.99 vs. Alice New Author at $7.00, well the tradeoff is clear. Good luck whichever you decide!

Whoops, I forgot my question. Where are you chatting with these readers?

There are lots of places to chat with readers, although ironically, I avoid those online-right-now chats (as opposed to yahoo groups or other groups where you essentially post a message and read replies eventually) like the plague.

But as Terry said, if you have the right cover, blurb and price, the books sells themselves. There's really not a lot of marketing you can do that is all that time/cost effective, except: write the next book .

Each book seems to provide the best marketing for your other books than all other marketing strategies combined.

I enjoyed your post, Amy. The argument for lower prices does make sense, which means more sales.

Amy, congrats on your indie success. I'm not quite brave enough yet, but I'm working on it.

Wonderful, thought provoking blog. And thanks to everyone for all the comments!

Amy,
I'll second Jill's congrats on your Indie success. Thanks for a thought-provoking post. You've brought up a lot of good points.

Congratulations on the big sales. I think part of the explanation might be word-of-mouth advertising. Whenever I find an author I enjoy, I buy all of their backlist and tell all of my friends about them. Good luck on your next project, no matter how you publish it.