Today shape-shifters, werewolves, and others are a big hit in romances. While doing intensive research for my paranormal fantasy set in mythological Egypt, I discovered that the concept of shape shifters is as old as the world and often associated with Romance.
In Greek Mythology, the god of gods, Zeus seduced many pretty women, but he had to switch to bull or shift his lovers to swan, or heifer, or other animals to protect her from his jealous wife Hera.

In the Egyptian Mythology, the gods use their shape-shifting power to perform their duties, attack enemies or defend followers. Let me introduce to some of the shape-shifter gods who play a direct role in my paranormal fantasy: OSIRIS’ MISSING PART, based on the myth of Isis and Osiris.
Isis was the goddess of family and health, and the most beautiful goddess in the pantheon. Her crown was decorated with the horns of a cow, encasing a solar disk between the horns. Sometimes she was represented as a cow, or a woman with a cow's head. Isis, wanted a son and spent years hoping that the handsome Osiris would stop flirting and propose to her.

Osiris, the god of knowledge, work and agriculture, was probably the only Egyptian god who never shifted to another form. His subjects adored him because of his kindness. With his Atef cone over his hand, his scepter and a key of life in his hands, he was so handsome that women and goddesses alike fell in love with him.

Seth, Osiris’ hateful brother, threw iniquities on the Egyptian people who called him god of storm and darkness. Seth usually wore a red mantle to match his red hair and eyes. Because of him, Egyptians considered the bright red to be a color of evil. Osiris’ brother was often represented with a human body and jackal’s head. He could switch to a black pig or hippopotamus, or even to a crocodile or a shark, as when he tried to capture Isis underwater in the Red Sea.

Nephtys, Seth’s wife, is a protective goddess who symbolizes the death experience. In the funerary role, Nephthys often was depicted as a bird of prey called a kite, or as a woman with falcon wings, usually outstretched as a symbol of protection. Nephthys' association with the kite or the Egyptian hawk (and its piercing, mournful cries) evidently reminded the ancients of the lamentations usually offered for the dead by wailing women.
Anubis, believed to be the son of Nephthys and Seth, was associated with the mummification and protection of the dead for their journey into the Afterlife. He was usually portrayed as a half human, half jackal, or in full jackal form wearing a ribbon and holding a flail in the crook of its arm.

Nut, mother of Isis, was the goddess of the sky. She spent hours bending over the earth or reading the star constellations to decipher the future and wisely explain the world plans.
Sobeck, the crocodile god, protected the justified dead in the netherworld, restoring their sight and reviving their senses, but he often ate their insides before mummifying their bodies. Because of his ferocity, he was considered to be the patron of the army.

Everyone hated the ferocious Kismet, also called Sekhmet. The goddess of destruction had a statuesque woman body and a lioness head adorned with the solar disc and a cobra. Her hatchet man, Nekhoret the vulture, helped her in her attacks.

Min, the gloating dwarf who loved to exhibit his long erect penis and instruct young men on improved performance, was the god of the desert. Osiris didn’t like him as he tried to court Isis. Min often claimed that his member beat all others in length.

Horus is the son of Osiris and Isis. His favorite shape is a human body with a falcon head bearing an orange sun disk wrapped with a golden cobra serpent. Ancient Egyptians believed that the Sun was his right eye and the Moon his left eye.
OSIRIS’ MISSING PART 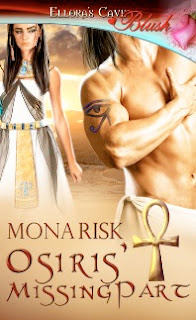 When the evil god, Seth, killed his brother, Osiris, cut him into fourteen pieces and spread them over Egypt, Isis, goddess of family, found and reassembled thirteen body parts. She used a human substitute to replace the fourteenth missing part, his male organ, where his godly power is stored.
Love blooms between the charming Osiris and Isis as they fight evil gods and search for the missing member, but can Isis forgive the sins of his past and their unexpected consequences?
This book is dedicated to the many friends, readers and fans who love Ancient Egypt, a fabulous civilization, shrouded in mystery, glamour and mysticism.
At Ellora’s Cave Blush $5.24: http://www.jasminejade.com/p-9394-osiris-missing-part.aspx
What readers and reviewers say about OSIRIS’ MISSING PART
1-By H. M. Taylor "silvarie" - 5 stars
If you are looking for something a little different you have found it! Full of adventure, romance and humor this is a great holiday read. Help other customers find the most helpful reviews.

2-A NIGHT OWL REVIEWS BOOK REVIEW 4 stars
Mona Risk draws upon Egypt and the mythology of the Egyptian gods. Join her for the adventure as she takes you on a trip into the past and into an enjoyable realm. I enjoyed this tale and look forward to more Mona Risk titles.

3-By Steph "Author of "The Giving Meadow, 5 stars
Risk crafts an exotic adventure filled with supernatural happenings, greed, betrayal, and love. The novel is sophisticated for romance readers with love scenes that are graphic, sensual, and tasteful. Risk's imagination shines against the lush backdrop of ancient Egypt. "Osiris' Missing Part" is a wonderful escape to another time and place that proves love does conquer all.
Posted by Mona Risk at 8:12 AM

Great and interesting post, Mona! I always loved mythology from around the world and found Egyptian mythology fascinating! Thanks for sharing such a great informative post!

This is an incredible myth,Mona, and how fun that you've based your story on it. I have it and can't wait to read it. Amazing how the people in that time period could come up with these great tales and how lucky we are to have them to read.

Best of luck with lots and lots of sales.

Mona,
I love this mythology and appreciate all the research you did for this wonderful book. Wow--it's all so fascinating!

Hi Mona, Interesting post! I love mythology and I am so excited to read Osiris' story! :)

Great post! I have a fascination for the Egyptian pantheon.

Lovely post, Mona. The idea of shapeshifters has been niggling at me for a couple months. Do I have it in me to write a convincing shapeshifter story? Loved all the research and detail you've put into your book. What fun; I love research. Wishing you great sales.

Mona, this is a great post. I especially enjoyed the pictures you provided. I recognize a few of these Egyptian god figures from movies, etc. Fascinating!

Hi Terry, you are the expert on shape shifters and werewolves. I am glad you enjoyed this post.

Paisley, when I went to Egypt and visited the temple of Isis in the island of Philae, the devout Muslem guide, tried to avoid the shocking details with a "of course you know the Myth of Isis and Osiris." When I pushed for details, he gave me some websites to look at!

Hi Josie, in addition to a trip to a Egypt and a special visit to the temples and monuments of Upper Egypt, I spent hours on the Internet researching the exact names of trees, plants, birds, food, ancient cities... It was a long process but a lot of fun. For example I discovered that Isis was called the Lady of the Sycamore, that tree is called Nehmet in hieroglyph language.

Misty, let me know your impression of the book.

Arwen if you love the Egyptian mythology, you will enjoy Osiris' Missing Part and the long trip of Isis and Osiris through the Nile Valley and the Red Sea.

Nightingale, I am so glad Osiris' Missing part is on your TBR list.

Vonnie, you can write any genre you set your mind on. And I'm sure it will be fun, emotional and a big success. The research are a necessary pill but one we often enjoy.

Sheila, I have a lot of actual pictures I took in the temples, but they wouldn't show the pictures of the gods as well as these graphics.

Lilly, Egyptian Mythology is a lot of fun and my book is written in a tongue-in-cheek tone to match the stories.

What an interesting post, Mona, with wonderful pictures. You did a superb job with this, and your book sounds fascinating too.

Hi Beth, I'm glad you like the post. Egyptian Mythology is a fascinating subject, so rich in stories.

Great post! Egyptian mythology is part of our DNA, I think. Most humans relate to the stories, which makes them perfect for plot themes. You've uncovered a treasure trove, Mona.