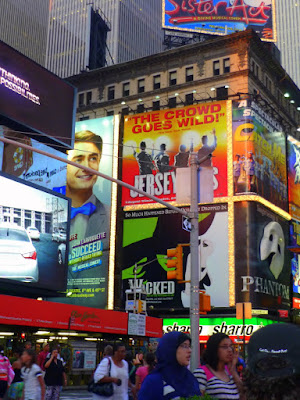 I believe we usually find what we expect to find. My vision included battling off muggers with all the techniques I learned in self-defense class, keeping my purse close to avoid purse snatchers, and jumping out of the way of speeding taxis. With that in mind, I was worried about my trip to the Big Apple. Some people talk about being from the sticks in a joking way because their city is smaller than many, but I am from the sticks. My birthright as Indiana born and farmer’s daughter makes me a walking cliché. Even when my sister moved to the big city of Indianapolis, she asked me not to talk too loud or say “ya’all” because that would mean she might somehow be connected to countrified me.

Going to the RWA conference excited me, but the thought of traveling terrorized me because I’d heard every bad story out there. I really expected to be mugged. With that in mind, I gave my Significant Other a fake wallet to carry to give to the mugger. LOL. Now some of you think I am a total bumpkin, but I have walked the streets of London, Dublin, Paris, and Rome without any fear. No one got around to telling me bad stories about those cities.

My second greatest fear besides being mugged was airport security. Only a week before some story broke about an elderly cancer patient having to remove her adult diaper. Most of the time I flew through the security lines without even being scanned or patted down. In Chicago, I was pulled out of the line by a young TSA worker who informed me I did nothing wrong, but I looked like the type not to fuss. The man didn’t even ding me about the bottle of water in my purse.

While the airports bustled, the employees still managed to be polite and helpful. One food service cashier in Dulles Airport reached in her purse and gave me two Band-Aids when I asked where I could buy some, probably saving me at least two dollars. When we boarded the plane and found our seats were not together fellow passengers willing moved around my SO and I could sit together.

My third fear was looking like a hick from Indiana. That was harder to overcome since that is what I am. Trust me; I brought an entire wardrobe, which included night and day outfits with coordinating shoes. If transporting large numbers of shoes across the state lines was suspicious activity then I was guilty. Remember the Band-Aids; those were because I wore heels in the airport, and new ones. Who knew I would board a series of small planes that loaded on the tarmac. That’s what you get when you fly cheap.

If I had a fourth fear, it had to be transportation. Some kind soul in FTH suggested Carmel Limo service. If you paid ahead, it was only about forty dollars to get a nice clean limo and a polite driver. Most of the time, we used our feet to get everywhere. The one day we decided to use the subway a Mariachi band surprised us by playing as they traveled from car to car. I dare anyone to be unhappy listening to Mariachi music.

The one moment I experienced a twinge of panic was when we got jumbled up in the opening of the Transformer’s movie. Wall to wall solid people and the perfect place for a pickpocket I thought. The normal person might think I’ll wait until it passes, but I wanted to get back to the hotel because of the FTH reception. With a deadline looming, I used my Army training, but mainly my high school teacher skills to weave through the crowd dragging my SO behind me.

In retrospect, my fears were all groundless. No matter where we went, everyone was very nice. One vendor in Chinatown did hand me a pamphlet on losing weight that I didn’t like, especially since I had been gobbling down every delicacy NYC possessed. Overall, nothing bad happened. No mugging, even had a street vendor lower his prices when it looked like I wasn’t buying. Being from Indiana, I wanted to point out that wasn’t the price on the placard, but I didn’t. Actually, I tried, but we had accent conflict so I took the price he gave me.

Ironically, I expected a meeting with muggers, runaway taxis, and con artists. Truthfully, I may have encountered more con artists if traveling alone because I do have gullible stamped on my forehead, which explains the ivory bracelet I bought outside the Louvre in Paris. Yes, it was real, as in real illegal. My first impression was the man needed to support his family by selling costume jewelry. As a recent immigrant, he had a hard time getting a job and had several children. His mother was sick too. Obviously, my SO was not traveling with me then.( A few of you may wonder what happened to the bracelet, I wore it through customs, then promptly gave it to my sister whose son works in customs. He’ll have to confiscate it from his mother.)

This time I did not find what I expected, which was a good thing. Have any of you had trips turn out differently than you originally expected?
Posted by morgan at 12:01 PM

Morgan, sounds like you had a wonderful trip to NYC. I've traveled in at least 24 or 25 or these United States and NYC was the friendliest I've been. We went in 2008 and went from the Bronx to Queens and out to Coney Island. To Battery Park to Ellis and Liberty Islands. I hope I get to go back some day.

It's nice when things turn out better than expected. I live in Canada and am always amused when friends and family come from Europe and can't believe how big the country is. My Danish cousin thought we could drive from Toronto to Vancouver in a day! That's the equivalent of driving from Buffalo to Seattle.

Hi Jill James,
I do think it is interesting that you found New York the friendliest. Of all the places I've been, I found Salt Lake City, Utah the cleanest. Holland did impress me since they scrubbed their steps and wash their windows on a regular basis. I doubt I've ever scrubbed my steps.LOL

Hi Joan,
I had a teacher friend who went to Canada to catch a cruise ship to Alaska. She fell in with some questionable sorts who left her high and dry on the east side of Canada when she needed to be on the west side to catch her ship. She got there, but was not a happy camper. She expounded in detail just how big Canada is.

Morgan, I am glad you had a great trip to NY. For more than ten years, my aunt had a family reunion every Thanksgiving in NY and we had a blast. Never been mugged.

Morgan,
NYC is such an exciting town, and one of our favorite places to visit.
Mona--Thanksgiving would be a wonderful time to visit, also. The Christmas decorations might be up around the city, and you could see the Macy's Thanksgiving Day parade live.