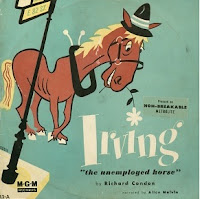 with:
Irving
"the unemployed horse"

by Richard Condon
narrated by Allan Melvin
from MGM Records

I did my pre-holiday house cleaning the other day while listening to Christmas CDs. (Okay, maybe I'm dating myself here.) One in particular, Rudolph, Frosty and Friends' Favorite Christmas Songs, provoked a twang of nostalgia. Listening to the voices of Burl Ives, Jimmy Durante, Fred Astaire and others from classic holiday TV specials, especially Frosty the Snowman, brought on a rush of childhood memories.

One recollection came from when I was about four years old, and involved a Christmas gift from my aunt and uncle. My very first audio book—Irving "the unemployed horse."

Irving is a talking horse, who gallops from New York to the North Pole to save a snowflake named Gus. All ends happily-ever-after when Gus arrives safely and Irving gets a job with Santa. The inside and outside covers illustrate the story. I listened to those 78RPM records over and over again, driving my two older siblings crazy.

The nostalgia has stayed with me, teasing me, haunting me. So I jumped onto the internet and fired up that wonderful invention of a search engine. And what do you know? I found several sites referencing Irving, including, to my utmost joy, available downloads and an audio stream from kiddierecords.com.

I found reviews in Billboard and Life magazines from 1947. (No, I wasn't alive in 1947. Not even close.) Life wrote, "A delightful fable about a horse that rescues a snowflake from a fate worse than death." Sounds like a pitch to me, and in only sixteen words.

C. H. Miller Hardware Co. placed an ad in the Daily News, Huntington and Mount Union, PA on Friday, September 26, 1947, advertising a Christmas lay-away plan, including several children's records. Irving was listed for $1.45, tax included, alongside Tubby the tuba, Herman the littlest locomotive, and the Bear that wasn't.

The story of Irving and Gus by Richard Condon is narrated by Allan Melvin. If you're old enough, you might remember Allan as the voice of Magilla Gorilla and as Alice's boyfriend, Sam the butcher, from the Brady Bunch.

Listening to the download of Irving "the unemployed horse" has brought a huge smile to my face.

What holiday memories make you grin?

I wish you all a happy and blessed holiday season!

Dawn Marie Hamilton dares you to dream. She is a pre-published writer who pens Scottish-inspired fantasy and paranormal romance. Some of her tales are rife with mischief-making faeries, brownies, and other fae creatures. More tormented souls—shape shifters, vampires, and maybe a zombie or two—stalk across the pages of other stories. DawnMarieHamilton.com You can also visit Dawn Marie at Castles & Guns on Tuesday December 20. Twitter: @DawnM_Hamilton
Posted by Dawn Marie Hamilron at 6:00 AM

I still listen to CDs! What are the options? (Don't tell me, I have an Ipod, but I really don't like it.) I can recall being about three years old and listening to Gene Autrey singing Rudolph the Red-nosed Reindeer while helping my parents decorate our Christmas tree. My favorite ornament was a little plastic red-nosed Rudolph with a red ribbon hanger attached to his back. When I married and started my own Christmas traditions, my mother gave me that little Rudolph. He's on my tree right now, with a new ribbon and old memories. Happy holidays to you, Dawn!

Hi, Pat. Reading your comment gave me a chill. Rudolph is a favorite of mine too. I just love all the tradition around the holidays. Thanks for visiting.

A favorite memory is from when I was very little, 3 or 4. The lady up the street, Miss Mary, had an aluminum Christmas tree with the revolving color wheel underneath. I thought that was the most beautiful thing I had ever seen. Anyone could have an old, green Christmas tree but I thought only very rich people could afford a metal one. LOL :-)

What a hoot! I remember those trees. Thanks for dropping in and sharing, Jill. I love hearing about holiday memories.

I love my Christmas CD's, too. Can't beat the Mannheim Steamroller music. I've played the Christmas 2-piano arrangements and they are fantastic.

My kids used to throw oats and carrots on the roof for the reindeers. They were horrified when they caught birds eating their offerrings sure they'd be cheated out of Christmas presents. I was glad it was birds instead of rats living so close to the woods.

Hi, Josie. I like Mannheim Steamroller too. Though there isn't much Christmas music I don't like. Thanks for stopping by.

I like the idea of feeding the reindeer, but NOT the thought of rodents. Raccoons and squirrels are not my friends. :) Thanks for dropping in, Morgan.