Today I was tired and for a change watched old shows on the TV. In fact, four old episodes of FRIENDS. Particularly the one where Ross goes to London to marry his British fiancée, Emily. Joey, Chandler and Monica fly with him. Phoebe stays home because she’s pregnant and big. Rachel stays with her because she can’t stand to see Ross getting married. But she changes her mind and follows them, wanting to tell Ross she’s still in love with him, before it’s too late.

Oops, wrong name blurted at the worst possible time. I couldn’t believe my eyes, because my new story starts with Mary-Beth blurting the wrong name while making love to her fiancé. Nothing like saying the wrong name to put the kibosh on wedding plans!

But what if the wrong name turns out to be the right one?

RIGHT NAME, WRONG MAN is a sexy romantic comedy set in France.
What’s a girl to do when she whispers another man’s name in her fiancé’s arms? 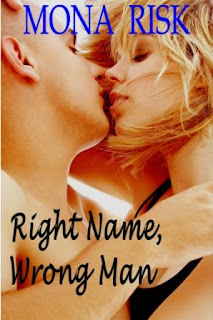 When forbidden dreams about the sexy French Dr. Yves Malroux assail her at every turn, Mary-Beth puts her wedding plans on hold. She signs up for a summer training program in surgery with Yves, and flies to France to confront her past and the man who broke her heart years ago.

But she never expected the French doctor--who’s also a count-- to insist on his trainees staying at his historical chateau. Sleeping under his roof, next door to his bedroom, is more temptation than Mary-Beth anticipated. Desire for Yves burns as hot as ever, especially when he focuses all his charm on Mary-Beth to convince her she needs passion in her life. While too many questions still swirled in her mind, her jealous fiancé summons her back home.

Will Mary-Beth let her heart decide who’s her right man? Will Yves break his no-strings-attached rule to offer love and commitment?

Already half-asleep, Steve squeezed her to his side, with a faint “Hmm”. Soon, his light snores filled the air. Sated and relaxed, she stroked his silvery hair. “Love you—”

What had she called him?

Oh God, oh God. Had she said Steve or… Yves?

Her fiancé grumbled in his sleep. She immediately yanked her hand away from his head. Her fingers flew to her lips and her stomach somersaulted. She couldn’t have whispered the loathsome name? She’d buried it long ago and forgotten the sexy French doctor and his charismatic smile.

Had Steve noticed the slip of her tongue?
Posted by Mona Risk at 8:28 AM

Ooh, I agree, Mona, that's a great premise! Love the excerpt! I cringe for Mary-Beth, imagining how I'd feel if I called my lover by the wrong name. And it sure does make me curious to know more about this mysterious Yves!

I hope RIGHT NAME, WRONG MAN "sells off the shelves" for you!

Hi Alyson, imagine my surprise when I saw Friends yesterday and laughed so much. Then I realized I had a similar situation in my new book. Glad you enjoyed the premise.

LOL, Mona. What an interesting premise for your novel. I've never watched "Friends" but will try to watch the episode you mentioned, thanks to my brilliant, tech-savvy sons.

Oh, my goodness! What a hoot! The subconscious at work.

Mona, I love Friends! Nice cliffhanger, leaving to wonder if he heard. ;-)

Joanne, I was like you, never looking at shows, but last night I was so tired, I turned on the TV to relax and was so glad I did.

Isn't it a lovely coincidence? It convinced me I did well in my story. LOL

Hi Loraine, ok so I'll use this short excerpt from now on.

Friends was classic, wasn't it? It was a show that most everyone could just sit down and watch and enjoy. I think Mary-Beth would have made Rachel a great friend. hehe

Nice excerpt. I enjoyed this story very much - need to write you a review. I'll work on that this week. I really enjoy your writing, Mona. You've got a nice easy style that really wraps the reader into the story and keeps them there.

Neat post, Mona, and what a great premise for your story! We're happy to find story lines everywhere, aren't we?

AW Thank you Steph. Love that: Mary-Beth would have made Rachel a great friend. hehe What a honor for Mary-Beth. Steph, I'm impatiently looking forward to your review. I have three good ones so far and need to reach 10.

Hi Rolynn, believe or not, I just saw this Friends episode yesterday, and was giggling delighted I could use it as a reference of "wrong name". I rarely watch TV.

I am totally addicted to the show F.R.I.E.N.D.S.! Ironically, my hubby and I are going through the seasons in order - watching a few at a time when we get the chance - and our next episode will be the London one!

Hi Debra, as you see the London episode next time, pay attention to the exchange of vows and the wrong name! I love that scene, Ross's expression and Rachel's expression. Priceless!