Plotting with Ripples and Waves 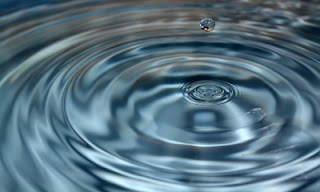 I'm not a psychotherapist in any way. I'm more of an observer and thinker. A recent post from Alicia Rasley at Edittorrent got me thinking about a theory I cooked up for myself to explain  the impact of change in my life.

I call it The Ripple Effect.

Visualize a pebble dropped in still water. Plip. Ripples radiate out from the strike zone. Eventually the ripples dissipate and the water smooths out.

Visualize a big granite boulder dropped in still water. SPLOOSH! A coronet rises around the strike zone. Big waves roll over the water's surface. A long time goes by before the water settles.

Visualize both the pebble and the boulder dropped into the water at the same time. Plip. SPLOOSH! Ripples and waves spread in all directions. Crests and troughs are amplified and diminished.

How useful is my Ripple Effect theory?

For me, the natural extension of observing and thinking is writing. So I use my theory to plot stories. Here's how.

The initial conflict in a book is the first pebble thrown in the still waters of a character's ordinary life. It's not necessarily a huge conflict, but it doesn't go unnoticed.

Before the story waters have stilled, toss in more pebbles and larger stones.

Surprise your characters and your reader, and maybe yourself, with unusual results of  the intersecting conflicts--the Ripple Effect.

In goes the boulder.

Then comes a rainstorm. Hundreds of thousands of drops fall. All the waves and ripples are beaten down. Conflicts are resolved. Order and peace return. The story waters return to a smooth glassy surface.

So what do you think? Does The Ripple Effect appeal to you?

Joan,
Interesting post. My story version is usually the messy version--a little bit ripple, a little bit boulder, until the story all comes together.

Hey Josie, Do you ever feel the need of a life jacket for all the turbulence in a plot? I've always got mine handy. Thanks for dropping by.

LOL, Joan. Yes, that's a good way to describe many of my plots--especially before final editing.