The Reluctant Cougar and Self Promotion 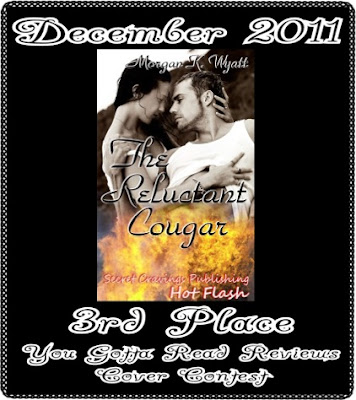 The epitome of being a successful author is having your book in the grocery store, especially if it is in a cardboard display in front of the checkout aisles. Everyone who goes to the grocery will see your book. Next time you shop, check out the display. It is only the very well known authors who rate this type of promotion; the rest must self-promote. In fact, it is even in the contract of many small presses that failure to self-promote will result in termination of contract.

Social media, new releases, contests, blogs, interviews, book signings, and a booth at appropriate venues are venues for self-promotion. My first taste was with my book, RELUCTANT COUGAR by Secret Cravings Publishing that came out in November. I did the news releases, social media, website and the book went to two dozen reviewers without a ripple being made in the literary world. Time to try different tactics; I entered RELUCTANT COUGAR in cover contest at http://yougottareadcovers.blogspot.com.

Of course, the contest fell on Christmas week. I begged friends, associates and friends of friends to vote. My daughter, future stepdaughter, and betrothed all begged for votes on their social media pages. I went back and re-asked friends who hadn't voted to vote to garner a third place banner and a free month of advertising.
It is work, but it is far from over. I must get Reluctant Cougar running, before my second book, CUB IN BLUE, comes out in January. To this end, I have a contest for a wonderful 18" strand of pearls, plus Godiva chocolate. Surf over to morgankwyatt.com to enter.

One lucky commenter will win the book. Here’s a short excerpt.

Char considered Ashlee’s words for all of five seconds. “Nope, he wants you. Young guys are going out with older women all the time. Don’t you watch television? Read magazines?” Char surveyed the break room. Spotting the east sector security guard, she motioned him over to the table.

When Ashlee left, she usually made a point of saying goodbye to Darius, the guard, who seemed to be on the shy side. She feared for him since you could never tell what Char might do.

“Darius,” Char started, “we need a younger man’s opinion and thought you’d do. By the way, how old are you?”
“Twenty-eight,” Darius answered, fiddling with the radio on his belt.

Not dissuaded, Char pulled him back into the conversation. “Darius, our friend, Ashlee,” she waved off-handedly at Ashlee as if Darius hasn’t wished her goodnight for the last sixteen months , “has an admirer who is constantly sending her emails, cards, jokes, and such. He does this twice a week. Ashlee thinks he can’t be interested in her because he’s considerably younger. We need your younger man opinion since you’re roughly in the same age range as her possible beau.”

Just hearing Nick called her beau made Ashlee blush, but she stayed quiet, curious to see what Darius thought.

He asked, “How long has he been sending you stuff?

Drawing her brows together, she considered the time. “Six months.”

“Six months. Wow, have to admire the dude. He has tenacity. Any average guy would have given up by now. I bet you’ve done enough to give him hope.” Darius nodded, agreeing with himself.

“You think he’s really interested in me?” Ashlee found the whole concept shocking. No one would mistake her for a Botox-filled Hollywood star chasing younger men.

“Way past interested, I’d almost say obsessed. There’s no reason a guy would keep contacting you if he wasn’t interested in seeing more of you,” Darius explained as if she were a particularly dense child.

“I thought he was being nice,” she explained, ignoring the group stare confirming her dim-wittedness.

“No guy is that nice. He wants to go out with you. Has he ever asked you out?” Darius continued, suddenly a part of the group.

“No, well…” She thought about the awkward phone call they had when she went to help Daniel’s sisters with a yard sale featuring his possessions. “Last time I traveled through his area, he did mention going out for drinks, but as a friend deal.”

Interested in reading more? Cougar is available in ebook form at Amazon, Barnes and Nobles, Bookstrand and Secret Cravings, here's their link: http://store.secretcravingspublishing.com/index.php?main_page=book_info&cPath=5&products_id=181 If you read this far, then you deserve the answer to the contest. The move is 9 ½ Weeks. Surf on over to morgankwyatt.com and enter. I extended the contest to February 15th. Good Luck.
Posted by morgan at 6:36 AM

Morgan,
Sounds like you are on the right track for promotion. I read somewhere that the average consumer has to see something 7 times before they purchase it.

And, I'd love a copy of your book. :)
Best wishes on your success!

On Take Free Bitcoin you may claim FREE satoshis. Up to 22 satoshis every 5 minutes.