My Characters Own Me

I turned 65 last week--a wonderment, really, since I'm so young. I find that I adore this age. I can now be me without hunting for an excuse. You see, I'm a curious mixture of "I Love Lucy", Blanche Devaraux on "The Golden Girls" and "Maxine" in the cartoons. People just watch me for a few minutes, raise their eyebrows and then shrug, no doubt thinking that is one crazy old broad.

When Calvin and I married ten years ago, he insisted I retire. He claimed he wanted the pleasure of my company all day long. Poor soul soon learned I needed something to keep me occupied so I wouldn't dust him to death or launder his clothes while he was still wearing them. One day he cuffed his hands on my shoulders, pushed me toward the computer in the spare bedroom and said, "Sit down and start writing. You keep talking about it, but never do it. I'll see you later." He hurried back to his beloved news channel on the TV.

That was the day he lost possession of his wife. For I am now owned by my characters. They snatch me from my office chair and drop me in the coolest places: Texas, Paris, Budapest, Scotland. They've had me on horses, on the backs of bucking bulls, speeding along on Harleys, scrambling across the rooftops of vans, and running from terrorists on the streets of Paris. They make me laugh, cry, growl and tremor in fear. They shower with me. They talk to me while I'm driving. They whisper in my ear as I toss items in the grocery cart. And they invade my dreams. I'm telling you, they won't give me a moment's peace!

I am one lucky woman! 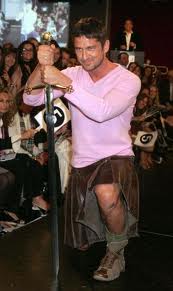 Right now I'm being bossed about by a hunky Scot in a kilt. We don't always get along, either. Believe me, I've asked myself more than once why I made him so stubborn. To which, he quips, "Ye dinna make me, lassie. I came to ye fully formed." And he did.

You see, two years ago, I had a cancerous cyst removed from my saliva gland. A four-hour surgery that has left my left cheek and ear numb. About a month afterward, two golden orbs started glowing in the back of my mind. Cancer, I thought. Despite what the doctors told me, I was convinced that cancer has spread to my brain. I went into major worry mode. I researched online and not once in all my research did I read that brain cancer glowed. Nor did I have any of the symptoms the Mayo Clinic and others listed. I was just about to call the doctor's office when the golden orbs blinked. Eyes? Those are eyes? (By now, I suspect your gaze has drifted up to my last sentence in paragraph one...that's okay...I understand.)

Those golden eyes watched me for months...silently...waiting...and I had no clue what they wanted.

Then one night as I was in that fragile, fluttery state between wakefulness and sleep, the eyes moved from the back of my mind to the foot of the bed and slowly the shape of a huge bear formed.

"Oh, I'm sorry," I whispered to the bear. "You've come to the wrong author. I don't write children's stories." He shook his head. "Oh? You're not a children's bear?" Slowly the bear shifted to a man in a kilt. "Oh dear, you're still in the wrong writer's bedroom. I don't write paranormal."

He stalked around the foot of the bed and stood next to me. "Aye, lassie, but ye will." He lifted the covers and I slid closer to Calvin to make room. The Scot settled into our bed and folded his hands over his broad chest. "Let me tell ye how bears came to be extinct in Scotland..." And from that point on Creighton Matheson has owned me...and will until I finish this book and another character moves into the dank, dusty recesses of my mind.

Do your characters own you?
Posted by Vonnie Davis ~ Romance Author at 10:56 AM

You're so lucky to have a husband that's a writer. Mine would have me committed.
My characters never take physical form. I hear their voices, then have to look for them.

Yes, I'm very lucky, Sandra. I'm also lucky I haven't been committed yet. LOL Thanks for stopping by!

My characters definitely own me :-)

Oh, it would be so fun to be possessed by a character in a kilt.
My heart still belongs to my first hero, a stud of a ranch hand. I still want to revive him--and his story. I'll get to someday. I need to retire, but can't afford to yet.

You KNOW my characters own me, Vonnie. Especially Caedmon. That man owns me heart and soul. And I have a confession to make...just in case you didn't know. Creighton owns me too! LOL Since the first time that man showed up on paper, he has owned me top to bottom. Now get the story done so he can own millions of other women as well!! LOL XOXO

Vonnie, you sure know how to make me laugh. A Scot in kilt in your bed. Poor Calvin. How did you manage to daze your dear hubby's mind so that he allow such a sacrilege? And you're trying to make us believe that story of characters possessing you? Me think you're gifted with a marvelous imagination. Did the Scot gave you a kiss for your birthday or did Calvin punch him at the right time?

Oops I mean Did the Scot give you...

Keri, I hope your experience is as interesting as mine.

I have very strong feelings for my first hero, too, Ana Morgan. I hope you can revive him, too.

Creighton has given me a rough day. We aren't speaking at the moment. LOL

Mona, Calvin is always asleep when my characters come calling. Plus, he's got his hearing aid out. LOL Besides, he's a writer, too, and I've heard many mumbled conversations between him and his heroine Bonnie Silver.

Vonnie,
Your Calvin is a sweetheart. I will chatter endlessly about a plotline or character. Writers probably have happier marriages because we are not thinking about faults in our husbands, lives, or marriage as many women are. Oh no, you think about sexy Scots while I wonder if I can push my heroine off a cliff and into the ocean...and have her survive with only few abrasions and no memory.

Oh, Vonnie! I can't wait to read your Highland paranormal. :)