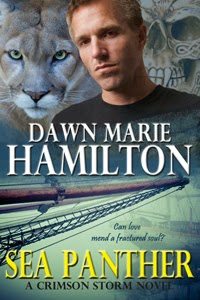 Can love mend a fractured soul?
After evading arrest for Jacobite activities, Scottish nobleman Robert MacLachlan turns privateer. A Caribbean Voodoo priestess curses him to an eternal existence as a vampire shifter torn between the dual natures of a Florida panther and an immortal blood-thirsting man. For centuries, he seeks to reverse the black magic whilst maintaining his honor. Cruising the twenty-first century Atlantic, he becomes shorthanded to sail his 90-foot yacht, Sea Panther. The last thing he wants is a female crewmember and the call of her blood.

Although she swore never to sail again after her father died in a sailing accident, Kimberly Scot answers the captain's crew wanted ad to escape a hit man. She's lost everything, her fiancé, her job, and most of her money, along with money belonging to her ex-clients. A taste of Kimberly's blood convinces Robert she is the one woman who can claim the panther's heart. To break the curse, they travel back in time to where it all began—Jamaica 1715.

Your cover turned out great, Dawn. I like the balance of the shadowy panther and skull!
I'm off to buy.

Thanks, Ana! It will be available on March 20.