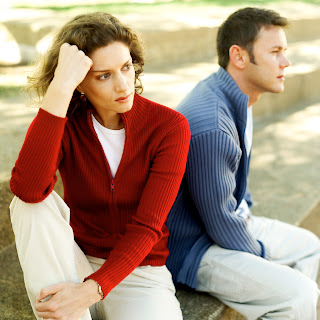 Sally and Tom are having a knock-down-drag-out battle of the sexes. Their repartee is blistering the air around them. Sexual tension seethes like a volcano, spewing steam and lava.

Can you hear it? Oh yeah, the dialog’s easy and lots of fun.

Can you see it? Even easier.

Can you feel it? Umm, not so much.

Why? Are you writing from inside your characters’ heads? Is your scene overloaded with internal monologue? Possibly.

Here’s an exercise to help you get out of their heads and into their bodies. Sit relaxed in a chair. Assume the identity of one of your characters--let’s try Tom. Fill your head with his words. Absorb the emotions behind the words. Now think--how would he mime those emotions and thoughts?

Mime? That’s right, get up out of your chair and mime. Skip the white face and go straight to gesture and movement and inarticulate sound.

Tom is angry. His hands are fisted, his shoulders tight, his breath constricted, and he’s yelling. That’s all true, and it’s all reactions confined to his head and torso that Sally might not even notice. Try using his limbs to express his anger. Does he throw up his arms, pace the room, slam a door? Now he’s moving around in the setting you’ve chosen for this fight. Even though he’s muzzled him, he’s still expressing his emotion.

Now let’s go back inside his head. Under the anger is lust. A fine line separates the two. In typical romance fashion, he’s got a woody hard enough to bend nails--the hammering kind, not the manicuring kind. What’s going on with his other four limbs?

Do you remember the delicious swoon-worthy kiss that Rhett Butler gives Scarlett O’Hara when he leaves her on the road to Tara before he goes off to war? Whew!

That’s what Tom wants to do to Sally. How do his arms and legs show his emotional conflict? One way is that his pacing swoops in and around the delectable Sally as he moves about the room. The anger drives him away, the lust draws him back. Another way is... you tell me.

How does your Tom or Sally mime the emotion and the thoughts that will make this scene pound in the hearts of your readers?

For inspiration, search the fabulous Emotional Thesaurus at The Bookshelf Muse.

Great advice. I always struggle with the choreography. Thanks for posting this.

This lends into a sexual tension class I am taking. Great points as it all goes together to make an emotionally powerful scene.

This was a great post. Thanks so much. Gets the imagination moving.

Joan,
Your posts are always so interesting. I especially appreciate the link to the Bookshelf Muse. What a great resource. Thanks!