I've had fans ask if I've been around wolves, and I'd wanted to visit a wolf sanctuary, knowing there are several around the country, but way far away. Then someone asked if there might be one close by. So I did some research and found one 2 1/2 hours away in Montgomery, Texas. So with two fellow librarians, we went on an adventure and visited the wolf sanctuary and a fun time was had by all.

It was hard to get a picture of the carved wolf head beyond the gate, but here is the gate to the estate of the St Francis Wolf Sanctuary. 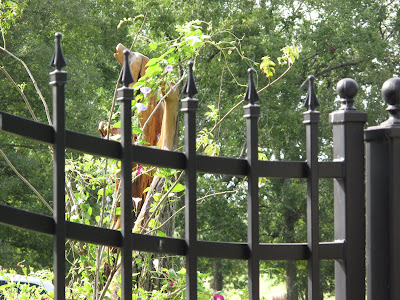 I wanted to share a few blogs about the various animals/sightings, and am working diligently on Heart of the Highland Wolf edits since it's due on Monday. So I've really got to get back to it. But here is the first of the stories. 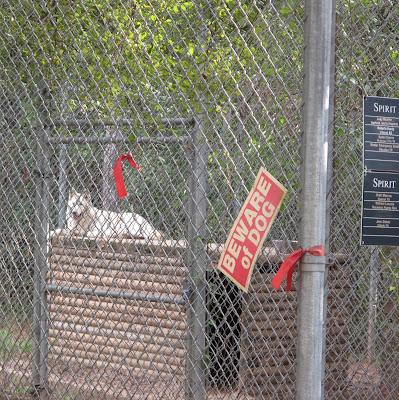 Part of the reason I write that my werewolves have long lives is I don't want them to lose their mates at an early age. This is a part wolf, part dog, but looks very much like a wolf and acted like one, who lost his mate, Spirit, three weeks earlier. This was the first time he came out of his home to sit on top of it after losing her.

He actually came to the fence and howled a couple of times, but it was hard to get a picture of them howling. They'd howl, then pace and with their long legs, moved very quickly. 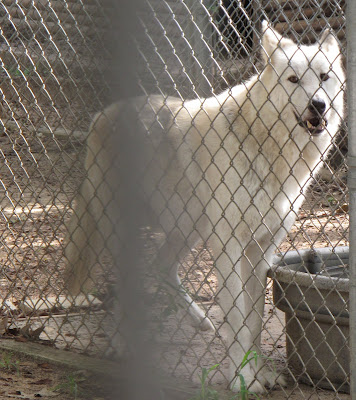 One thing that can distinguish a wolf from a wolf dog is the narrow chest, longer legs, and many constantly paced around their pens. Arctic wolves do have shorter legs and ears though. Arctic wolves are gray wolves also.

But he really did come out of his grief somewhat to finally come to the fence and participate a little in the excitement caused by visitors and volunteers who were there to see them and that was good to see. He was very alpha--his ears always perked up. I'll show a very beta wolf also--and how different the posture. 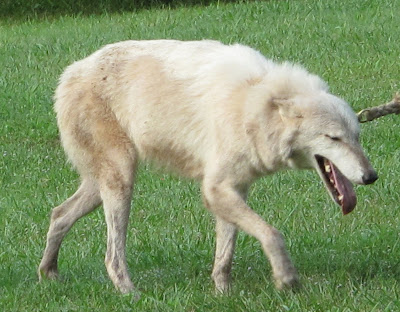 This was one of the wolves that was walked when we were at the St Francis Wolf Sanctuary. She's a beta, as you can see from the way she stands. She was thrilled to go for a walk, yet she kept her ears back, her tail tucked between her legs, her body slightly bowed.

She has always lived alone, so she stays alone in her pen, while all the other wolves or wolf dogs had companions. But those who managed the sanctuary felt she wouldn't allow anyone in her pen to share it. She's the only one of the full blooded wolves that they walk. She loves the man who walked her here, but some women, she doesn't like he told us! 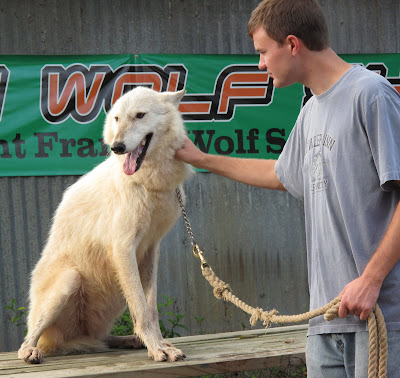 When you see the wolf like this, it reminded me so much of one of my standard poodles, how she would do this on occasion. 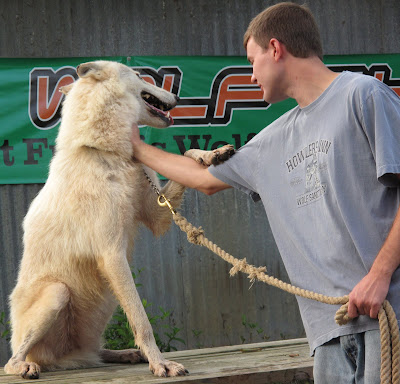 I'm wondering, though, if she found the right male, would she be happy to share her pen with him? 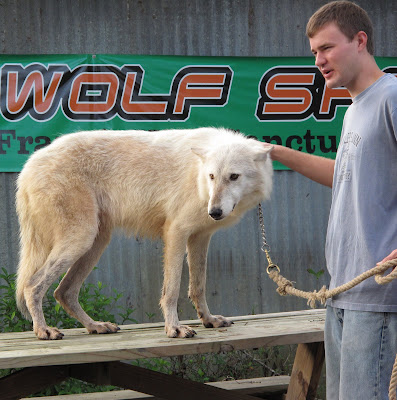 Remember, whether a beta wolf or alpha, everyone deserves a delectable mate!

This is the beta Arctic Wolf scent rolling. Dogs will do this also, and bring back the "delightful" smells they've picked up--the scent of dead animals, etc, to their pack. Our yellow Labrador Retriever would love to do this after we gave her a sweet smelling bath. Not to her taste. :) She would prance around, telling us how she was dying to go outside right after her bath and once we let her out, she'd scent roll to gather something nicer smelling to bring back inside with us--to share her good fortune. 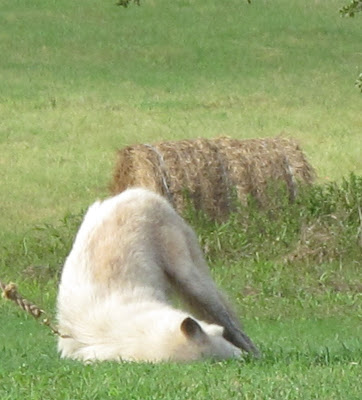 Here, the she-wolf looks like she's just taking a nice nap in the open field. Her nose is buried in the grass--taking in all the delightful aroma. :) Her pen was just as grassy and comfy, but she wouldn't have the fun of smelling all the little animal fragrances that collect in the surrounding area--rabbits, mice, all those tasty treats.

This was the wolf dog who had lost his mate and for 3 weeks stayed in his den. But here, he actually came out to the fence and howled near us. 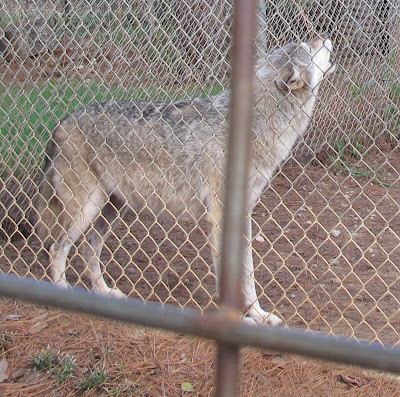 When the wolves howl, it was pretty quick, so capturing a picture of them with their head tilted back and giving off a howl was hard to do. The volunteers said that they normally didn't howl much during the day, and one of the wolves was doing all of the howling at first. Then several began howling. 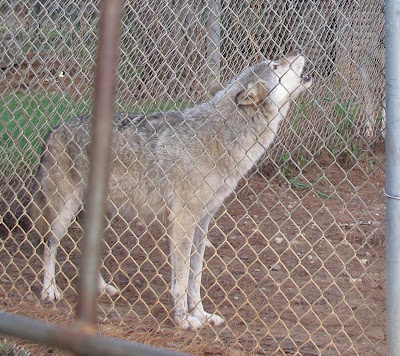 Here is a wolf and a wolf dog--the wolf howling. She howled constantly, then later some of the others howled. But she was the first. She was very alpha, scent marking and scratching the ground with her paws. 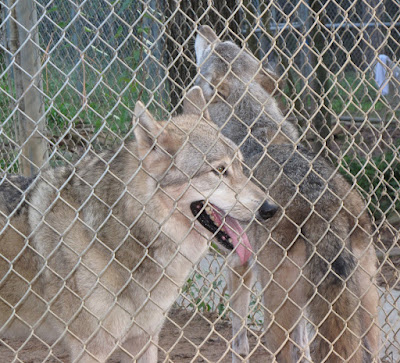 And here is some good news:
A nice review at Reviews and More by Teresa Hissong!

Do you have a wolf sanctuaries near you? I'd love to go to another!

Terry
"Giving new meaning to the term alpha male."
www.terryspear.com
Posted by Terry Spear at 1:07 AM

Thanks so much for sharing your wonderful pictures, Terry. And good luck finishing your story.

I found your post interesting. One of my uncles had a half shephard and half wolf named Idsy. That dog terrified me because he had had a blue eye and a brown eye andI am a scardy cat. He sure was a good hunting dog, though. Great photos...

Terry,
I've never heard of a wolf sanctuary, but I appreciate your interesting blog.
I'm near Charlotte, NC, and we have a bird sanctuary near us--but no wolves as far as I know.

Several years ago we actually took my daughter's Girl Scout troop to a fun event called "Howl around the fire" at a Wolf Sanctuary in Minnesota (I can't remember where, exactly...).

We arrived at the sanctuary at the arranged upon time to find a lovely campfire in the center of all the wolf pens. The folks who run the center showed the girls the freezer where they kept the food for the wolves and wolf-hybrids - mostly it was roadkill picked up by the local game wardens or farmers in the area (though it was frozen, the stench was still incredible!). Then they got a little education about wolves and some of their mannerisms. They were also "introduced" to the wolves in their pens and some predatory birds who made their home at the sanctuary as well.

I do remember that there were a pair of Mexican Red Wolves (orphaned brothers) there in addition to the Arctic and Timber varieties...

Finally, just as dusk began to gather, we migrated to the campfire where the girls were served hot chocolate as we waited for the "magic" to begin.

As one of the staff explained to the girls, one of the wolves will begin to howl and others will pick up the call. They will continue this until almost full dark, and will do the same thing as dawn begins to break. It's never the same animal every night beginning the "howl," and some of the wolves will join in every time, others only occasionally. Still, it was a remarkable experience and one I was thrilled to share with my daughter...

How interesting, Paisley! I'm sure he looked more wolf than a couple of the wolf dogs that were at the sanctuary, yet, still, there was something wolf like in all of them. :)

Hi, Joanne, they do have red wolves in your neck of the woods!! Somewhere! :) I loved going to a rescue sanctuary for injured owls and hawks and the like in Oklahoma.

How fascinating, Cai! I was in charge of a Girl Scout Troop and the they ended up stirring up a bee's hive at a zoo in Tulsa, talk about a disaster! Anyway, how interesting! Was it the one at Ely? I'd like to go there someday.