The Power of Scent 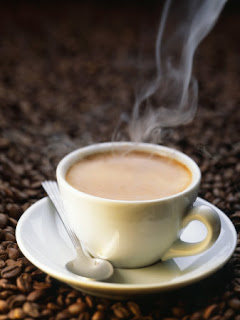 Most of us have been taught to use all five senses when writing. Let’s face it, everyone uses hearing and seeing—they’re so powerful. Sensual writers don’t miss out on a chance to use touch or taste, but the sense of smell gets overlooked. It is regulated for sniffing perfume, sweat and the coppery odor of blood. What a shame because it can be so amazing. Let me give you an example from my own life.

At a school raffle, I won a very expensive bag of coffee beans. After I won someone placed it on my desk. Teachers and students gathered around sniffing appreciatively mentioned how they wish they won it. Since the coffee was still in the whole bean form, no one was getting any until I had it ground. It wasn’t a priority since a cold had me doing my zombie imitation.

Wiping my nose, I shuffled into my favorite grocery to grind the beans. My head cold was so bad I could barely smell anything, but I could smell the rich exotic aroma of the Sumatran beans. I stocked up on cough drops and cold medicine before heading to the you-checkout lane. An employee appeared out of nowhere to help me use the self service checkout lane. When was the last time someone wanted to help you at the self service lane?

My helper inhaled deeply several times and I do not think he was appreciating the odor of Sucrets that stuck to me like stale cigarette smoke. It was the coffee.
Two men standing against the customer service counter suddenly straightened and headed my way. They struck up a conversation that centered on my coffee. Here, I thought men didn’t have very good noses. I know it wasn’t me with my red nose and blood shot eyes that pulled on them like a magnet. The lingering, the aimless questions lasted way too long. Did they think I was going to brew a pot to share? Invite them home for an impromptu coffee break? Home exerted its own powerful pull on me.

Ready for bed and the blessed oblivion of sleep, I exited the grocery door only to be met by my fantasy man. Six feet of lean male with wavy hair and wire rimmed glasses. Best of all, his eyes lit up when he saw me. He smiled and called out a greeting. I knew it was the coffee. Who knew? When I’m feeling better I may get the coffee out of the freezer and hang out in front of Krogers. Who knows what might happen, I might start an actual riot among the coffee set.

Tell me your scent stories.
Posted by morgan at 11:25 AM

Can't say as I blame your admirers with the coffee beans. You do have a point - what is it about that smell that is so comforting? I wonder if it is partially because it is what we head for in the morning to comfort us for having to crawl out of bed and face a new day and/or we sit with a cup of coffee to chitchat with friends.

Morgan, who knew that all we needed to attract the hunk of our dreams was rich, mellow coffee?

Great blog full of imagery. I wasn't a coffee drinker until I met Calvin nine years ago. Nor did I know how to make it. Having lived in Paris for a year, he has very refined coffee preferances. Not to say my coffee making skills were severely lackluster, but after grimacing through that first pot, he bought me a new coffee grinder and state-of-the-art coffee/espresso/cuppachino maker. Sometimes it pays to be bad...

Paisley,
I have to admit here I love the smell of coffee, but I do not drink it. The coffee was for my daughter.

Jill,
When I think of the money I wasted on highlights, stilletos and makeup when all I really need was a bag of organically grown Columbian coffee beans. Sheesh, I hear the smell of a frying hamburger has about the same effect too.

Vonnie Davis,
I will learn from you...being bad is good when you don't really wan to to do the thing.I never learned to change a tire and to this day...I have AAA road service.

Thanks for dropping by and enjoy your coffee.

Oh, Morgan. I absolutely loved your post. I'm a bit of a coffee snob, myself. I think your experience at the grocer might be the seeds of a story. What do you think?

Every time I check out at the grocery store with a bag of freshly ground coffee, the clerk inhales deeply and remarks at the fabulous smell.

I think there's a reason writers like to inhabit coffee shops, and it's not all to do with the caffeine. The smell of fresh ground coffee is comforting and arousing at the same time.

Morgan I am with you about smell. I never leave my house without spraying perfume, or rubbing scented creme on my throat and arms. It just makes you feel neat.
And I can never resist the smell of coffee.

When we were selling our house in Ohio, the real estate agent instructed me to make coffee and bake a cake just before she brought her clients to visit our house. She said it makes a cozy atmosphere that helps a sale.

Dawn Marie,
I don't know enough about coffee to be a snob, but I do know when it smells good.:)

Thanks for stopping by.

Lu,
I think it is about time for me to buy coffee again and grind the beans.:)

I never thought coffee as being arousing, but it is certainly magnetic. Even when I'm not buying coffee I still go down the aisle for a cheap sniff.:)

OK, Morgan, I am dying to know--what kind of coffee was it? I'd never dream of starting my day without a good cup or two of black coffee.

I love writing scents into my stories. Whenever I smell strong, Turkish coffee, I am instantly transported to a very specific street in Constantine, Algeria where the coffee merchants are found. I don't remember the name of the street- I think it's called Zamouche Blvd-- but I will never forget the aroma.

I love writing scents into my stories. Whenever I smell strong, Turkish coffee, I am instantly transported to a very specific street in Constantine, Algeria where the coffee merchants are found. I don't remember the name of the street- I think it's called Zamouche Blvd-- but I will never forget the aroma.

Hi Morgan,
I don't have a "scent" story but your post tickled my funny bone. Sorry you were sick, but loved your observations. Wish I'd known this tidbit about coffee beans while single. lol