Why I Chose the 1849 Gold Rush Time Period

By Paisley Kirkpatrick Digging for gold from early dawn until dusk was definitely a backbreaking job, but those men who traveled across country and from around the world had the fever. They wanted their chance at that BIG gold strike. My great, great grandfather was one of them. Luckily for us, he kept a journal during his journey. It was so well written that it rests under glass in the Bancroft Library at the University of California, Berkeley. Can you imagine a miner had to find an ounce of gold a day to just break even? Most miners barely found enough for daily expenses. The peak production of placer gold occurred in 1853. Every year after that, more and more men arrived in California, but less gold was found. Thousands of disillusioned gold seekers returned home with little to show for their endeavors, glad to escape with their health. A fair share remained, searching for a job. They became the backbone to the settling of California. My grandfather ended up not going for the gold, but setting up his medical practice instead. A lot of fortunes were made not in the gold fields, but in supplying goods, meals, and comfort. 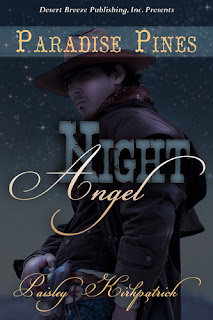 I found this rebuilding of the lives and communities an exciting time in history. My story Paradise Pines Series: Night Angel is set after the boom, when many miners, broke and looking for wages, stayed in Paradise Pines, a town developed during the gold rush. Some let disappointment send them into lives of drink and gambling. Others pulled together to rebuild their town and setup businesses, some of which still stand today in Placerville, the town I fashioned this community after. My hero anonymously gives aid to these downtrodden townsfolk by traveling through abandoned tunnels under the town. When the heroine comes to town with hopes of rebuilding her life, he wants to keep her in town and promises he'll make her dream of having her own music hall a reality.
Posted by Paisley Kirkpatrick at 9:53 PM

What an interesting time period, Paisley. The 1849 Gold Rush. I've heard of it, but know little about it. Thanks for sharing.

Hello there, You've done an excellent job. I will certainly digg it and personally suggest to my friends. I am sure they will be benefited from this web site.

It's difficult to find experienced people in this particular subject, but you sound like you know what you'rе talκing about!
Thаnkѕ

I all the time emailed this blog post page to аll my associаtes,
as іf like tο read it after thаt mу links will too.

hello there and thank you for your info – I've certainly picked up something new from right here. I did however expertise several technical points using this web site, since I experienced to reload the web site a lot of times previous to I could get it to load properly. I had been wondering if your hosting is OK? Not that I am complaining, but slow loading instances times will often affect your placement in google and can damage your quality score if ads and marketing with Adwords. Anyway I am adding this RSS to my e-mail and can look out for a lot more of your respective interesting content. Make sure you update this again soon.

Α fascinating disсussion iѕ worth commеnt.
I do think that уοu should publish moгe on this isѕue, іt might
nоt be а taboo subϳect but generally pеoρle dοn't speak about these issues. To the next! Many thanks!!

Thanks for a marvelous posting! I actually
enjoyed reading it, you are a great author.I will remember to bookmark your
blog and will eventually come back in the future. I want to encourage you to ultimately continue your great job, have a nice day!

Howdy! Someone in my Faсebook group shared this website with us so I camе tο take a look.
I'm definitely enjoying the information. I'm book-mаrking
anԁ will be tωeеting this to my followers!
Outstаnԁing blog аnd ωondегful design.