In a thriller, or even in a romantic suspense, fear is an essential emotion. The protagonists are exposed to unusual scary situations. As a result, they are thrown out of their comfort zone into traumatic experiences. We can’t expect them to act naturally. Fear may be one of the important emotions they feel, either because they are facing an enemy determined to attack them or because the enemy wants to hurt someone dear to them. Even the macho hero is exposed to fear as he tries to protect his beloved heroine, or a child, or a defenseless person threatened by evil.


I’m often thrown out by characters so tough they can fly through horrible situations without blinking an eye.


In my new book, NEIGHBORS AND MORE, a romantic suspense, available at Amazon, http://tinyurl.com/96bjqcm   the heroine Alexa is trying hard to be strong in the face of adversity, crime, and a baffling situation that gets more complicated by the hour. Every time she copes with a problem, she deals with her emotions and promises herself she won’t let anything affects her from now on, until a new crisis challenges her, until she’s pushed to the limit of endurance.
Of course, Dante is at her side, playing his hero part.


As writers, we strive to convey those feelings of suspense, fear, and expectation to the reader.
As readers, we love to bite our nails, feel our pulses racing as we study the scene of the crime, analyze the details, and try to guess who’s done it.


Have you ever been exposed to fear? Real fear? 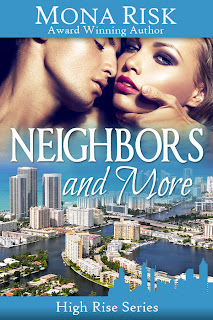 I did when an intruder entered my house years ago, stole the stereo, my children’s piggybank, and my gold bracelets. When I heard from my then three-year old daughter that she saw a nice man with a big heavy suitcase in our fenced backyard and he patted her on the head, I almost collapsed. But this story is for another time.
NEIGHBORS and MORE: Life in a high rise, 300 neighbors & a man dead in a Jacuzzi.
"Neighbors and More was a fun #sexy read that kept me guessing until the end." D. Johnson. #romance, #suspense, http://tinyurl.com/96bjqcm
NEIGHBORS and MORE: Can she count on her dear neighbors, including Dante, for help? #romance, #suspense, http://tinyurl.com/96bjqcm

I've been in fear of being raped, of not having enough money to pay bills, of losing my marriage. Have I ever been terrified for my life? No. I've had some close calls driving and felt incredible relief afterwards.