How do you feel about the remake of classic fairy tales?

A while back Red Riding Hood was released by Warner Brothers, and coincidentally directed by Twilight’s Catherine Hardwickle. I have to admit, I was anxious to see this movie, and although I did enjoy the twists: wolf to werewolf, loner boyfriend, surreal dreams, etc., I don’t know how I feel over all about the rewrite of children’s fables into adult stories.

Now, having said that I have to also admit that I am one of those folks that always wondered why the princesses always were in some state of waiting on their heroes to rescue them.

Rapunzel locked away in a tower.

All of this began to make me wonder what was the real purpose of fairy tales, and which came first the tales for adults or the tales for children.

Yep, you guessed it…it would seem that in a lot of cases with the fables I researched they were originally intended for adults.

What I didn’t know was that originally not only were the fables for adults, but also had a sort of class association. Women of lower status told the tales to children sort of as teachings. As they became more associated with children inferences of sexual or violent natures were cut from the stories. Although some folks disagreed because they believed it took away the value of “teaching” from the tales. But, as this continued more and more we were left with the versions we have today.

All of it is fascinating to me. I find myself in conflict. A part of me loves the idea of fables that teach children the importance of making certain choices or decisions. Another part of me does not like the overtones: women need men to rescue them, women’s helplessness, etc. 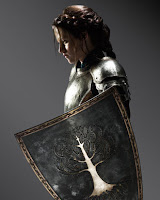 So, why not rewrite them? Then another part of me asks “When do we write something new?”

Honestly, I’m completely confused, but I guess we’ll all find out how folks feel because the battle of the Snow Whites might tell us what we need to know. Will the children or the adults win?

I personally find it silly to remake the fables with a twist. We grew up with these stories. How can we enjoy them now with a different character or ending?

Red Riding Hood did have a different ending. It was more complicated than I thought it would be, but it did hold my interest.

I must be shallow because I took the fairytales at face value - something to enjoy. I hate remakes of movies so can't even imagine the remake of a fairytale. Why don't they use their imagination and write something new. We as writers are told we can't even use a cliche - how do they get away with redoing a fairytale?

I guess you can tell I wouldn't spend my time going to see the remakes. :)

The first time I read the original Grimm's fairy tales I was shocked. OMG, I don't remember Cinderella being so bloody. I think the fairy tales we remember are not quite how they were written. So they have probably already changed over the years.

Paisley, I tire of remakes, too. There is so much to write about, but it does feel like people keep rewriting the same stories.

I guess there are a million different voices with which to tell a story...even the same one, a few thousand times.

Jill, I agree; I think some of the originals might scare a lot of folks.

I loved your blog, Angela! I read a feminist view about how awful children's fairy tales were--how sexist. But I loved them, loved the idea that a hero would come to the princess's rescue, that I was that princess.

But on the other hand, I abhor the idea that the princess wouldn't also rescue the prince, that she couldn't stand up for herself. So even though I don't rework fairy tales, I write "fairy" type "tales" where the world is not really real, but that the hero and hero take turns protecting each other from the villains. :)

The best of all worlds!

Interesting post, Angela. I think fairy tales and fables are more often for the adult rather than the child. I've always said that most of Disney world is more for adults than children.