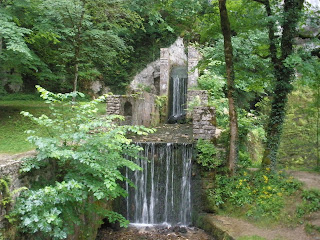 I would like to share with you some of the lovely places I visited recently when I vacationed in the Jura Mountains in France. The Jura is a department in the East of France that runs right up to the Swiss border. It is part of the Region of France known as Franche Comte and is renowned for its rivers, waterfalls, caves and the mountainous (or I would say hilly) landscape. There are also many sunny slopes covered in grape vines. (Immediately to the West of the region lies Burgundy.)

Historically the area is important for salt production from underground deposits and I visited the salt work at Salins Le Bains a few miles from where I stayed. Not the most fascinating subject you might think, but it was surprisingly interesting. 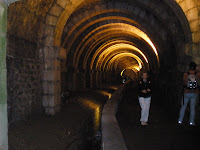 I also visited the Royal Salt Works 20 kilometers away. From Salins, they piped the salty water in pipes made of hollowed out trees to this impressive Victorian edifice. 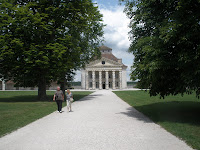 The region has been dry recently, so the waterfalls were not at their best, but this one near where we stayed was pretty. 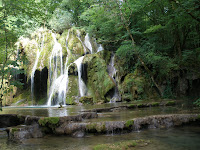 We also visited some the source of the River Loue and the River Lison. These rivers emerge fully formed from caves in the rock and are very impressive. This came as a surprise to me as the river sources I’ve seen near my home in England are springs that bubble up in boggy ground and start with a trickle of water, gathering strength as they flow toward the sea. 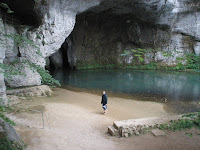 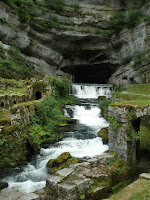 The Jura Mountains are not really mountains but big hills, and at the top are wonderful areas of high wild flower meadows full of butterflys and birds. Throughout the area are ancient picturesque villages. A truly beautiful part of the world! 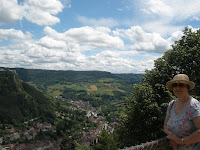 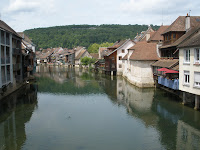 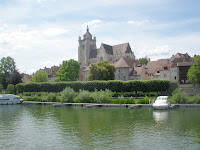 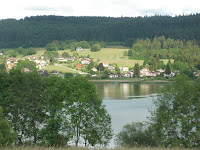 Posted by Helen Scott Taylor at 8:57 AM

Lovely post, Helen. I love hills and waterfalls. I'll have to put the region on my list for a future trip to France. Thanks for sharing your wonderful pictures.

Helen, thank you for sharing these pictures. I went to France so many times but never visited the Jura or Burgundy (la Bourgogne). Now I know where to go next time. BTW can we start chatting in French?

Helen, I enjoyed your post. I'm going to add the Jura Mountains to my France itinerary! Thanks.

Helen, I enjoyed your post. I'm going to add the Jura Mountains to my France itinerary! Thanks.

Thanks for stopping by to read my blog. I certainly recommend this part of the world to anyone planning a visit to France.

Your pictures are beautiful. Thanks so much for sharing.

I was too busy yesterday to stop in to see them. The houses are built so close to the water. Don't they worry about flooding?

Helen,
Thanks so much for sharing your beautiful vacation with us. The pictures are wonderful and the area is obviously rich in history.

Someday,I must travel to France. :)