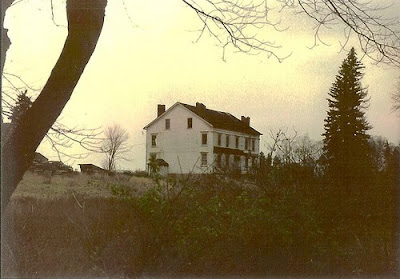 Author Thomas Wolfe is probably best known for the quote, “You can’t go home again.” He went onto write a book by this name also. Of course, people often ridiculed the quote stating they could go home again. They knew exactly where they lived. They could return to their childhood home, especially if their parents still lived in it.

The point he was trying to make is you can’t reach that nostalgic place called home. Remember that perfect place with carefree summers, laughter, and innocence. You can’t go there because you know too much. Remember how we couldn't wait to grow up. Often counting our age by years and months to hurry the process up. There comes a time with our quest for knowledge taints all that went before. Rather like my first pair of glasses.

Before I had glasses, everything had a smooth surface. After glasses, I discovered people had wrinkles, pimples, and scars on their formerly flawless faces. Tree leaves had veins. Mountains had rocky outcroppings and ominous cracks. Pigs had tiny hairs all over their bodies. It was an entirely different world.

Recently, I went to an REO SPEEDWAGON concert with my significant other. This was his dream to attend as a teen. Since it was an outdoor venue, we dressed in bermudas, sandals, and sunglasses, looking like the mid-age professional couple we were. We soon realize we had entered an alternative universe where people were attempting to return to their seventies home.

All around me, women strolled in their glittery shirts and over processed blonde hair reminding me of all the 70’s clothes I had since sold at numerous yard sales. I felt obvious with my colorful Coach purse that shouted ESTABLISHMENT. The men managed to dig out their faded black REO t-shirts and their tight jeans that involved sucking in the gut to zip them up. Lucky for them their child fathering days were in the past. They were all trying to return to a time when they were young and their worst problems involved a date or a flat tire.

Many, or I should say most, drank heavily. Seats by the bar allowed me to monitor the same people returning numerous times. Maybe alcohol could jumpstart their trip back to the world before it became complicated with children, mortgages and pink slips. It didn’t do anything for their singing or dancing skills. Often, the memory and body will betray us when we try to travel home.

As for me, did I go hoping to find a piece of the 70’s? No. Because REO was not on my personal adolescence playlist, instead I was a disco queen. A little Rod Stewart, Donna Summers, or even Abba might have caused me to dance in the aisles too. Who knows? My SO did point out that my high pony tail reminded him of the 70’s.

My husband took me to several Barry Manilow concerts over the years. About 2005 I told him to stop. Barry was not the singer he used to be and I would rather have my memories and CD's of him at his peak instead of going to a concert and see him feebly attempt to reclaim it.

Sometimes it does seem like you can't go home again.

For the life of me, I can't understand why anyone would want to even try to return home again. I've attended several class reunions and that is even a more sobering experience when you glance around at your classmates and see how some aged and others look like they'd been frozen since graduation. The house I grew up in appears small, but I lived there my growing up years and they were happy ones.

After going through several dark and tragic years, I am now happy again and glad to be where I am. No going back for me.

Paisley, I am soooo with you on not wishing to go home again. While I'm not thrilled with all the aches and pains of being 63, I'm at a happy place and plan on enjoying every second of it. My DH, Calvin, did his Masters thesis on Thomas Wolfe so I've heard him wax poetically about not being ablte to go home again. Lovely post, Morgan.

Thanks for stopping by and commenting. Sometimes, you don't even want to try to go home again. I will never put on the skintight disco pants again...it wouldn't be pretty.

Hi Paisley,
Thanks for commenting. I loved in the country in a small cement block house that I thought was wonderful. IIt is only as an adult I realize how small it really was.

I am so glad you're now in a happy phase of your life.

I guess it means so much to me because I did try to go home once and found out home moved.

I appreciate your blog about traveling and am so glad you and Calvin did make it back home.

Tell Calvin, there are still people out there reading Thomas Wolfe.:)

What a great post Morgan. It gave me goosebumps. I tried to go home, litterally. I wanted to see the place where I grew up. Big mistake. I cried that day and couldn't take a picture. I will never show it to my kids.
Now I keep two pictures of the big house where I lived with my husband and children for twenty -six years. One picture is from the front of the house showing our beautiful crabapple tree with pink flowers, and the other picture from the backyard showing our patio where I held so many fun parties. I will never go back to look at that house. I like it better in my memories and my pictures.
'You can never go home.' Because it will never be as good.
And if it was bad, you'd better forget it.

I've never understood the desire by some people to relive their high school years. I couldn't wait to get out of the place and start living! YES! My life, my way.

I could never go back to the place I grew up--there were too many of them. We moved constantly. However, my grandparents lived in the same place until they died. When my grandfather died I could imagine him there since my grandmother was still alive. Once she died and my uncle decided to tear the place down--well, that was actually the day they both died for me. As long as I could pass the house, they continued to have a physical presence for me.

Hi Mona,
I drove by old home to show my kids and found the new owners chopped down every tree on the property. My parents planted a tree when each child was born. It's pretty upsetting when your tree is gone.:(

Hi Denise,
My grandparents lived in the same house almost as long as I knew them. Their old house still exists. I expect to see them sitting on the front porch in the glider when I drive by.

I remember my house being so big, but yet returning to the neighborhood is now depressing and everything looks so small.

My memories are good ones, though.