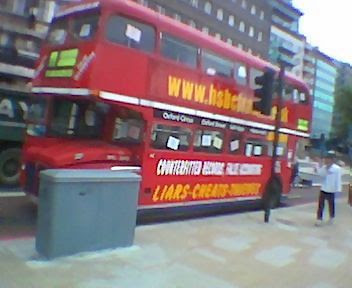 I will admit that sometimes I pull my secondary characters out of the stereotype bag. Maybe I underestimate my readers and think they need to have a huge sign to let them know the limits of the secondary character. My trash-talking waitress seems a lot like Flo from the old Alice show. Ever wonder how accurate stereotypes really are?

Recently, we were on the bus from Disney with several British families. Now my view of British families from PBS miniseries is that they keep their emotions to themselves, voices low, and a stiff upper lip. A tired family consisting of a mom, dad, and two children collapsed into their seats. The older brother started tormented the already cranky younger sister causing mother to explode. She separated the two of them grumbling about Disney needed to have a jail for bad kids so the parents could drop them off and have a good time. Hmmm, that sounded like something I may have told my kids to solicit good behavior.

The boy in question darted off the bus just about the time it was ready to leave. British Mom darted after him yelling that he would be left. My goodness she sounded almost American with an accent. She clomped back to the bus and begged the bus driver to wait while her son returned from his emergency restroom break. It just goes to show how wrong I was the typical British persona.

On the same bus was another British family, a quiet spoken mother and teenage daughter. They discussed everything in hushed, lovely-accented tones. At one point, the mother worried that she might get off at the wrong hotel. She walked quietly up to the driver and softly asked if she was at the right hotel. She was not, but she did fit the stereotype of my average British woman. Sometimes stereotypes do fit, but usually not.

One of the best romance novels I ever read was a woman torn between two men. They were both good, decent men and she was genuinely baffled which one to pick. The fact that one didn’t have some hidden evil past make the story compelling. The heroine had to have genuine reasons preferring one man over the other. The author cleverly did this while not turning the rejected guy into a jerk. Not using the stereotype was more work, but made for a more compelling read.

As writers, we have to decide what stereotypes no longer fit or even serve a purpose. Tell me which stereotype you’ve recently deleted from your character bag.
Posted by morgan at 8:15 PM

Email ThisBlogThis!Share to TwitterShare to FacebookShare to Pinterest
Labels: the British persona, when stereotypes don't work

What a thought-provoking post, Morgan! We all profile to some degree.
Misjudging can lead to all sorts of conflicts. Fodder for a writer.

Thank Ana for commenting. Is that adorable girl in the photo you?

OK, and I have to ask the name of that romance novel you mentioned at the end of the blog. Sounds like a good read.