A BOOKSTORE ON THE BANKS OF THE SEINE by Vonnie Davis 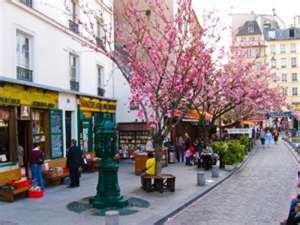 There’s a delightful bookstore in Paris called Shakespeare and Company. It sits on the Left Bank, within steps of the Seine and in view of the Notre Dame Cathedral. When we were in Paris, Calvin insisted I had to see it. He claimed it was the most unusual bookstore in the City of Light. I wasn’t prepared for the maze of narrow hallways leading to more alcoves of dust-covered books.

This Paris institution has an interesting background. Shakespeare and Co. was first opened at another location by Sylvia Beach, an American expatriate, in 1918. During the 1920’s, it was the gathering place for writers of the “Lost Generation” -- Ernest Hemingway, James Joyce, F. Scott Fitzgerald, Man Ray and Ezra Pound. During this period, the store was the epicenter of Anglo-American literary culture and modernism in Paris. It is featured in Woody Allen’s movie “Midnight in Paris.”

When the Nazis occupied the city, the store was closed down and never re-opened until another American, George Whitman, opened a bookstore in 1951 in a building that was once a monastary. Later he renamed his English-language bookstore Shakespeare and Company in tribute to Sylvia Beach. This store became a focal point for literary culture in bohemian Paris.

Now here’s where it gets really interesting to me. Whitman, in his youth, had hiked his way through Central America and Europe. He was deeply touched by the generosity of citizens who opened their humble homes to him and shared all they had. This universal-family-ideology stuck with him and, as a result, he opened his bookstore to starving artists and writers. The bookstore includes sleeping facilities, with 13 beds, and Whitman claimed as many as 40,000 people have slept in the shop over the years. His only requirements were that his guests, whom he called “tumbleweeds”, read, work at their art/writing and help out in the bookstore for two hours a day.
A delightful book, Time Was Soft There: A Paris Sojourn at Shakespeare and Co. by Jeremy Mercer, tells of a writer’s month living in the famed bookstore. Imagine! Free room and board in Paris. Granted one had little privacy. Bathroom privileges were on a scheduled basis. You had to be up and moving about when the store opened. But this is Paris, y’all! 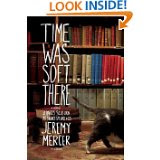 Here’s the book’s description that reinforces what I’m sharing about the place. “Wandering through Paris's Left Bank one day, poor and unemployed, Canadian reporter Jeremy Mercer ducked into a little bookstore called Shakespeare & Co. Mercer bought a book, and the staff invited him up for tea. Within weeks, he was living above the store, working for the proprietor, George Whitman, patron saint of the city's down-and-out writers, and immersing himself in the love affairs and low-down watering holes of the shop's makeshift staff. Time Was Soft There is the story of a journey down a literary rabbit hole in the shadow of Notre Dame, to a place where a hidden bohemia still thrives.”
Regular activities that occur in the bookshop are Sunday tea, poetry readings and writers’ meetings. George Whitman died there at the age of 98, nearly a year ago. His daughter, Sylvia Beach Whitman, now runs the shop and continues to allow young writers to live and work in the store. 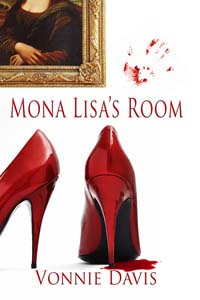 So, of course, I just had to include a scene at Shakespeare and Company in my recently released romantic suspense. AND TO ONE LUCKY COMMENTER, I'M GIVING AWAY A PDF COPY OF MONA LISA'S ROOM--Make sure you leave your email address in your comments. ~ ~ ~ To introduce my excerpt, I must tell you that because my heroine Alyson Moore has unwittingly foiled a terrorist’s bombing attempt, she’s been placed under the protective custody of French agent, Niko Reynard. They’ve argued outside Shakespeare and Company and are now inside the store. Niko’s looking for a little gift as a making-up gesture to his charge, who is pretty upset with him…
“Where are you from?” Niko detected an Aussie accent.
“Australia. Brisbane. I’m here to experience Paris, study art and do a bit of poetry writin’.” Eddie’s eyes were scanning the shelves. “Ah, here we go, mate.” He climbed a stepstool to reach what he was after. Turning, he leaned down to hand the two books to Niko.
“Thanks. Sketches of Parisian Rooftops and Sketches of Gardens of Paris.” He quickly scanned through the pages. Aly would love these.
Eddie hailed a greeting at two men, dressed in suits, when they entered and ambled through the narrow store, quietly talking as they climbed the few wooden steps to the next section.
Niko briefly glanced at them before flipping the books over to check the prices. “I’ll take all three.” He waited for the total and paid his bill. “Wrap them please so my lady friend can’t see them. They’re a surprise.”
“Oh, lucky her. I just love…”
Suddenly, screams followed by loud thumping and books falling filled the bookstore. Niko sprinted in the direction of the high-pitched shrieking, gun in hand. He bounded up the steps and rounded the corner. “Aly! Aly! What the hell.”
He skidded to a halt. One of the well-dressed men he saw entering the store earlier was on the floor, books covering most of his body. His companion was staggering, holding his hands over his eye and screaming like a banshee as blood ran down his face.
In the corner stood a pale and trembling Aly, her frightened blue eyes dominated her face. “They…they grabbed me! Said they’d kill me if I resisted. I…I karate kicked them.” She swallowed, obviously trying to gain control. “Kung…kung-fooed the hell out of them, too. And…and…”—she pointed to the screaming man still on his feet—“I think I poked his eye out with one of my stilettos.”
Niko ran a hand down his face, keeping it over his mouth to hide the smile. What a piece of work. He wanted to laugh. He wanted to hug her. And damned if he didn’t want to shake the daylights out of her for stepping out of his sight. Hadn’t he told her to stay with him?
“You okay?” Niko’s gaze swept over her, looking for injuries. He fought the urge to pull her to him and embrace her until her trembling stopped. Frankly, if he were honest, his nerves weren’t the greatest right this moment, either. When he heard her scream earlier, cold fear did a free-fall straight through his system.
Some professional he was. While buying books, Aly had to defend herself. His gaze took in the shambles. By the looks of things, hell if she hadn’t done a damn fine job. “Answer me! Did one of these bastards hurt you? Are you okay?”
“I…I gotta pee.” She was shaking violently. No doubt going into shock. Today’s events finally took their toll.
“I’ll show her to the dunny,” came the Aussie accent behind him. “Ain’t no wonder she’s gotta use the loo. The woman beat the bullocks out of the blokes, she did. Gobsmacked ’em, I’ll wager. Shall I call the police or will you?”
“I am the police. Counterterrorism unit.”

Such an interesting post, Vonnie!
I discovered my passion for writing after I was saddled with kids, cows and a mortgage.
In my next life--I want to live the wandering storyteller's life.

Great post, Vonnie! I gather that
Shakespeare was notsd in business when I visited Paris in the 1950s.

Best wishes to both of you.

How wonderful for you, visiting this wonderful shop and the release of Mona Lisa's Room. Its sounds like a page turner. Count me in.

Did you sleep there too?

Ana Morgan, children have a way of taking over our lives. I think mine were 25 before I saw Vonnie, the woman, again.

Hi Karl, George Whitman initially opened his store in 1951, but under a different name than it's known by now. Thanks for stopping by!!!

No, Morgan, we didn't sleep there. We stayed in a hotel on the Left Bank near where Calvin lived for a year when he took a sabbatical there.

Vonnie,
Thanks for a fascinating post. I must get to Paris and check out that shop. Best wishes on Mona Lisa. :)

Thanks so much, Josie. Paris changes you. I can't explain how; it just does.

MORGAN WYATT, CALVIN DREW YOUR NAME FROM HIS HAT. YOU'RE MY WINNER OF A PDF COPY OF MONA LISA'S ROOM. YAY YOU!! I'LL BE EMAILING IN A MINUTE.