By Paisley Kirkpatrick ''Line them up! Head them out!" While growing up, one of the television shows we always watched in our house was Wagon Train with Ward Bond. I suppose being raised with cowboys and westerns had an impact on who I am. The strength of the pioneers who walked (yes, most of the emigrants walked alongside their wagons) along the well-worn trail have earned my respect. Honestly, I know I wouldn't have the endurance to walk that far in a pair of boots that most likely were patched and repaired many times along the journey on the Emigrant Trail of about 2,000 miles. We have a copy of my great, great grandfather's journal that he kept while he traveled this trail in 1849. 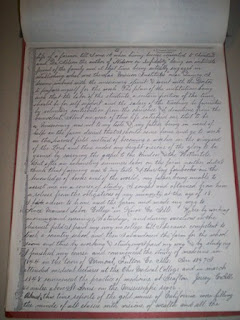 It is kept under glass at the Bancroft Library, UC Berkeley, California. Dr. Charles Kirkpatrick's handwriting was quite well done on the 45 pages. I was able to use what he wrote and sprinkle it throughout Marriage Bargain, my second story in my Paradise Pines Series which was released this week on March 21st. 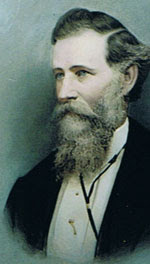 The trail was used by about 2,700 settlers up to 1849. After about 1848 the most popular route was the Carson Route which, while rugged, was still easier than most of the others and it entered California in the middle of the gold fields. Trail traffic rapidly fell off as the cross-country trip was much quicker by train -- only about seven days. The economy class fare of about $69 was affordable by most potential travelers. BLURB: Marriage Bargain is set on the dusty trail of a wagon train traveling from St. Joseph, Missouri, to the California gold rush area at Placerville, California, in 1849. Betrayal and embarrassment drives Darrah Benjamin to run away from home to take a tutoring job in San Francisco. Darrah finds her journey a pathway to love and forgiveness when an arranged marriage to the wagon scout becomes much more than a convenience. Chase challenges her determination to keep their marriage in name only with his promise -- she’ll give him her heart and invite him to her bed before they arrive at their destination. Darrah has an immediate attraction to the rogue, but holds her emotions tight because she doesn't want her heart broken again. Charles Danforth, a scout known as Chase, leads a wagon train of emigrants west through plains plundered by murderers. As an undercover agent of President Polk, he has sworn to stop the massacres. Darrah's inadvertent comment gives him the clue he needs to achieve his assignment. His Sioux blood brother helps Chase end the killings, but almost ruins Chase’s chance of winning Darrah’s heart when he takes matters in his own hands to demonstrate the depth of love Chase has for his wife. 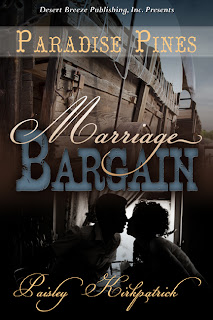 Posted by Paisley Kirkpatrick at 1:05 AM

Must be really neat to have an ancestors's journal.

Thanks Dawn Marie. Reading the journal really inpsired me. I hope grandpa is smiling over this. ;)

Having this be a family journal is even more exciting than any old historical record, Paisley. Talk about living history!

Thanks for stopping by today, Ana. I have kept you busy and am delighted to see all your support. I do treasure this journal a lot.

I am so impressed by your ancestor's handwriting, which also made it easier for you to read.

Congrats on your release, cute cover by the way.

Isn't it amazing that he had such beautiful handwriting? He was a doctor,too. ;)