By Paisley Kirkpatrick The end of October brings out the goblins and ghosts. Lots of tales of ghostly deeds and the unexplained are everywhere. I live close to the California Gold Rush community now named Placerville. I've personally encountered several of the ghostly remains of people who still hang around, sometimes making life a bit complicated when disturbed. I worked in an art gallery that was a corner saloon during 1849. The two story building stands over a creek and ghost hunters have said it is a perfect way for those spirits to enter the building. Really, I am not stretching the truth here. The gallery filled the bottom floor. Several business offices were upstairs. One problem we had occurred every Christmastime. The people upstairs closed their offices for the holiday week, yet I could hear heavy footsteps overhead and an occasional door slamming. I would notify my boss and she'd go upstairs and check for an intruder. She never found anyone. One morning I entered the gallery and found paintings turned askew on the walls and the tags that I'd taped under the paintings were all over the floor. We had four wastebaskets -- until one morning we found the pink one missing. The three gray ones were in the middle of the room. I missed the one time the ghost became violent. My boss and another employee were behind the counter when the large vase (about four foot tall) slammed against the wall on the other side of the room. It hit so hard it shattered into many pieces and the leg on the mahogany table was scratched. The Cary House Hotel, standing across the street from the gallery, has two ghosts that we know of. One is Stan who worked as the check-in clerk. He'd been drinking heavily one evening and made a pass at one of the female guests. Her man friend was jealous and shot Stan. He died on the lobby floor. To this day he rides the elevators up and down at night and checks each door by jiggling the door handle to each room. When I toured the hotel to take photos for my newly released story Night Angel, Stan wouldn't let me open the door to the old elevator. I walked up several flights of stairs during the tour. When it was time to leave, I had no problem opening the door and riding down to the lobby. The other ghost is George. He mistook a poker player as the one who'd cheated him the night before and shot and killed him before he realized it was the wrong man. There is a dummy named George hanging on the front of the Hangman's Tree Saloon across the street from the hotel. 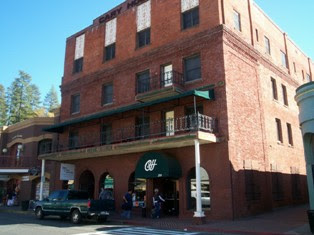 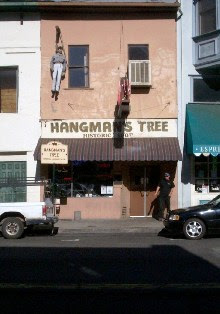 The television show that went around the country taping haunted houses and hotels presented a twenty minute portion of their show from the Cary House Hotel. There are a lot more stories in our community, but not enough time to share them all.
Posted by Paisley Kirkpatrick at 12:01 AM

Paisley,
How neat for you. I've been in many houses that were supposedly haunted. Even lived in one that everyone in the neighborhood refused to enter since the last three residents had died there. Never saw one ghost, not one, but we did have closet doors that would slam open in the middle of the night. LOL

I have never experienced a ghost, Paisley, but I have twice seen elementals. Gnomes, to be specific. Very quick quick flash that vanished when my rationa mind kicked in and said, "What's that?"

Hey, Paisley. I visited Placerville many years ago while staying with my Aunt in Salinas. I got the chills when we entered one of the old buildings, a sure sign a ghost was present. :)

Cool Morgan. We had a house up here the realtors couldn't sell because of ghostly happenings. Then, one night, the empty house burned to the ground.

Thanks for coming by.

Glad to see you here today, Ana Morgan. Sometimes it is hard to believe what we see, isn't it. I am a definitely believer.

Hi Dawn, I know there are a lot more ghosts in Placerville than I've run into. It gives the old place a bit of spice. Thanks for coming by.

Interesting story, Paisley. Perfect for Halloween. I'm always one who tries to find logic in every mystery...but who knows? Rolynn

Rolynn, Thanks for checking out my story. I think in the case of ghosts, you sorta have to let go of the common sense and wonder how it happens. There are a lot of ghost stories in Placerville. It was a wild time during the gold rush era.

Thank you, Josie. I'd love to visit Charleston. For some reason I have always been drawn to the south. It would be fun visiting some of those haunts.