Once more I’m spending the month of October preparing for the writing extravaganza known as National Novel Writing Month, also known as NaNoWriMo. As usual, my preparation for this consists of first deciding what story I should write, and then defining the characters, the world, and a general outline of the plot. I don’t actually start writing the story until the first day of November, but anything I can do to make the writing go smoother during the contest, I try to get done in October.

As it happens, this month I’ve got a somewhat easier job than usual because I picked for my writing project something I’m already very familiar with. In fact, I’ve already written the first five thousand words of the story. 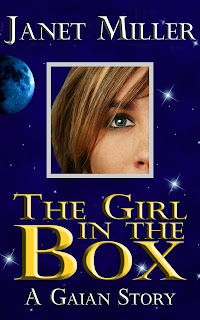 You see I have this short story I wrote many years ago called “The Girl In The Box.” It is set in my futuristic Gaian world and features a young woman who is handicapped due to a birth defect and confined to a box-like wheelchair she controls through wires connected to her spine. She’s fallen in love with a young man she knows only through the their voice communications, a man she’s never seen and who has never seen her. To make matters worse, he’s an unattached Gaian man who apparently believes she’s the right woman for him. Ami knows she wouldn’t be considered an appropriate match for him but Ganth has other plans.

I loved this short story, and so did a lot of other people. It is one of my best selling titles at Amazon. But the one comment everyone makes is that it is very short. So I’ve decide that I’m going to finish the story in the month of November. At the end of the short story it is clear that Ami and Ganth should have a happy ending.... but there are some complications that still exist. For one thing, she’s injured. For another there is someone determined to kill Ganth and his father, plus there is a small matter of the secret mission they were on. Plenty of conflicts to be overcome. And what about Ami’s crippled legs? Is she going to be able to walk again?

All of these questions will be resolved by the end of November and I expect to have the result up on Amazon sometime in December – after careful editing, of course. Adding more to Ami and Ganth’s story has been an ambition for a long time and now that I'm going to do it, I want the best for them. And for those people who think that 5K words is too short? Well, they can enjoy an additional 50K of the story very soon.

I’ll let you know in November how things are going.

Sounds like an interesting project, Janet. Good luck with Nano.

Thanks! I'm looking forward to it.

Sounds like an interesting story, Janet. I'm happy that it's selling well for you already. Just think what will happen with all those additional words. :)